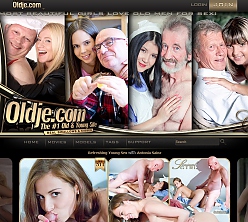 Old men and young women: it's a match made in history, proven throughout the ages to provide a safe and stable home in which to raise a family and enjoy lots of riotous sex. Oldje is one adult website that knows generation gaps don't need to be negative, that they can bring two seemingly different people together… for lots of riotous sex. A Sensual Girl website that's as hardcore as the old blokes doing the fucking can manage, Oldje will have you wishing old age would skip a few decades and arrive tomorrow.

Overview:
Historically and evolutionarily, older men and younger women have made good partners because the man has had time to establish his superiority over others and the woman is still of a fertile age. It's not all family practicalities though. Take Oldje for example: a site built around older man, younger woman couplings, this Euro hardcore effort bridges the generation gaps that seek to divide us from each other. The wrinkled faces, grey hair, and flabby gravity-addled bodies of the old gentlemen contrast sharply with the smooth-skinned, bright-eyed beauties swanning around in nude, nubile forms. Oldje promises "most beautiful girls love old men for sex," and "real swallows and kisses," and, from the expressions worn by the performers, these acts leave both the men and their young adult partners very satisfied. Can Oldje bring you the same satisfaction or will this generation gap prove too difficult to overcome and enjoy? You could throw nearly thirty Euros at the site and find out for yourself or you could let Mr. Pink's fingers do the proverbial walking. (No, no trouble at all. That's why I'm, here!)

Pros:
Old men and young women: what a pairing! Oldje makes dreams come true for both parties, giving the old fellas a chance to relive their youth with a tight-bodied, energetic young slut showing them a great time. The girls appear to relish the experienced touch of these men old enough to be their fathers, even grandfathers. Full nudity is most common here for both women and men, so whichever way you lean, you'll have plenty to ogle.

Shot and delivered for viewing in 1080p HD formats, Oldje's videos look and sound very good, bringing strong, clear images to your screen. Photo galleries are also quite good, reaching 5760px online and in zipped sets. The sex being showcased here takes place on sofas before music lessons, outdoors by a small lake, in hospice care, in offices and bathrooms and bedrooms and hotel suites, and even with groups of men going all-in.

Cons:
Without dates attached, the schedule behind Oldje's updates is tricky to determine. You're left unsure of when the next scene is due to arrive, but at least you know it's coming. Similarly, other Sensual Girls sites are devoid of dated content, too.

Watching two people fuck in unfettered High Definition videos can be a real treat, unless, of course, you're here solely for the girls and find the old, flabby, grey-haired seniors providing the dick less than inspiring. The men are obviously an acquired taste and many viewers won't be able to tolerate their cragged faces and declining bodies.

Videos might be HD and they might be offered for both streaming and download (and of course they are), but they're also offered in only one format. MP4s don't suit everyone and Windows users might find themselves wishing a WMV would appear here to help them out.

Other Sensual Girl sites seem to use the same models as Oldje. After spending some time here you may find yourself hoping some fresh faces would appear. It can become a bit boring seeing the same girls over and over again, but at least the context is different on each site.

Conclusion:
Oldje's theme isn't the most socially accepted one, no matter how many older-man-and-younger-woman relationships we can point to. This site deals with a potentially sketchy issue quite well, though, only hiring girls who are actually into old men (or at least can fake it exceptionally well) and shooting scenes heavy with subtly lusty atmosphere. Delivered in 1080p videos and 5760px photos, the imagery details the bodies in action and shouldn't pose any real problems to users. (Those already recoiling from the idea of watching old men fuck are harder to please, of course.) More video format options would be great to see here, as would dated updates and a more consistent update schedule. For fans of this particular niche, one that's not often dealt with well in hardcore porn, Oldje is wonderfully satisfying.