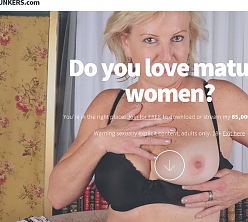 Overview:
When women get to a certain part of the human aging process, they kinda fall off the radar of many would-be suitors. Now afflicted with wrinkled skin, sagging breasts, a not-so-slippery snatch, and the annoying tendency to ask how everything's going with school, at home, with your family. But to some guys, usually those labeled granny fuckers or hag hogs by society's more sexually conventional members, these ladies often find their still burning sexualities denied by the typical male lust for youth. Old Spunkers aims to change all that, passing over the age groups featured on "MILF" and "Cougar" websites in favor of women so finely aged they've been deemed worthy by the government of Senior Citizen status and, in some cases, a pension! Old Spunkers' models are in their 40s, 50s, and 60s and have never been more aggressive about getting what they want! (What they want is, from all indications, dick.) Jumping on the nearest, hardest man around, these titular Old Spunkers throw themselves into the sex with aplomb. And, for $29.95 a month, you can throw yourself into their uniquely erotic and encouraging, even uplifting hardcore, one scene at a time, until you're supremely satisfied. Would wanton women of such experience leave you feeling otherwise?

After making the move to High Definition video formats a short while ago, Old Spunkers has looked better than ever. Reaching 720p resolutions in downloadable MP4s and streaming online in a more modest form, recent scenes offer stronger detail and color depth. Photo galleries are also provided and offer images peaking in 1280px frames and viewable online or in downloadable zips.

Cons:
Photo and video items are added a week apart, effectively padding the update schedule to appear twice as busy. Old Spunkers is not a small site, though, so you might wonder, as have I, why this updating method is in place. Many scenes and galleries are also added in segments, forcing you to ready a few streams or downloads before you'll see the full scene in question.

Although having recently undergone a modernizing makeover, Old Spunkers still looks a bit drab and lifeless, devoid of the strong sense of personality found in the actual scenes. The all-white background is quite bland and, preview images aside, there's nothing to suggest what Old Spunkers is really about. Many pages that should be info-loaded are not and those that needn't be often are.

Making your way through the depths of Old Spunkers' large archive is, quite frankly, a huge pain in the ass. The only browsing option you're really given is to scan the model index for someone you fancy, click them then rifle through their various online work. There's no central chronological list of all Old Spunkers content, making it very difficult to determine just how large the site actually is.

Less recent Old Spunkers videos are nowhere near the quality of the 720p HD MP4s and look pretty shoddy, I must say. Stuck in pixilated 640x480 frames and often suffering from interlacing and digital compression artifacts, these videos are best avoided in favor of the newer works.

Conclusion:
Old Spunkers already has a number of setbacks to conquer if it's going to command a new and appreciative audience - its models are hardly of the most popular sort and are usually relegated to less-than-busy niche areas of the industry. And, to be quite frank, Old Spunkers isn't doing itself any favors with a very poorly designed site that keeps blocking the easy path to satisfaction. Finding a model to ogle is easy, but finding a scene or gallery of a certain type without examining each and every one is basically impossible. Recent developments have brought High Definition videos to the site, but they're still being added in segments separate from the accompanying photo galleries. It's a navigational nightmare in here, folks, but you've got to give Old Spunkers a little credit for at least giving it a shot.