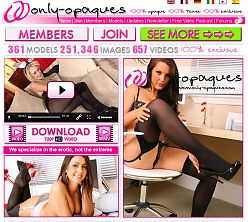 You might be wondering why a site focusing on opaque and not sheer stockings, leggings, and various other hosiery would interest you, a guy more likely to enjoy a hefty money shot than some tepid literotica. You might be wondering why the women wearing said hosiery are keeping their smooth, slender legs largely covered up. And you'll definitely be wondering if Only Opaques, the site in question, is worthy of twenty-five of your hard-earned dollars. Well, if you ever find yourself getting bored with hardcore, seeing all-nude naturalist erotica as pure fantasy, and praying for a softcore site unlike any other, a site that dares to not bare and instead uses the allure of stockings, lingerie, and a flirtatious smile to charm your gosh darn pants off, Only Opaques will be there to keep you guessing in a surprisingly sexy way.

Overview:
When you consider how much attention and energy woman are required to put into their dress and appearance - not by hippies, no, but by pretty much everyone else - it's a wonder they bother getting out of bed in the morning. The makeup, the hair styling, the endless trying on of various combinations of clothing items, and the stockings; oh, those stockings! Sleek, shiny, opaque. The perfect covering to let stand between you and the supple flesh of a woman's shapely lower limb. Opaque stockings are so attractive to straight men that the folks behind Only Tease created a website for the sole purpose of giving us guys a shit-ton of photographic and videographer softcore porn that perfectly showcases this particularly arousing piece of hosiery. Only Opaques is the site and judging from its tour pages, it's a doozy. The women glimpsed in Only Opaques' previews are gorgeous, yes, but they're made even more so by the fact that their slender legs are covered in opaque stockings that are usually just sheer enough to hint at their skin tone under the right light, but completely obscure the skin in most circumstances, leaving you to fantasize and ponder what lies beneath. For $24.95 a month, you can buy yourself unrestricted access to this, one of the only adult websites devoted to opaque hosiery in the history of the Internet, and grab yourself some HD videos and high-res photos in the process. See, there really is a kinda of porn for every fetish!

Pros:
Who would've thought stockings, tights, and pantyhose that obscure the sexy legs of a bunch of gorgeous British gals could be so damn enticing? Yet enticing they are, running over the feet, along the calves, up the thighs and often around the waists of these alluring young ladies. The girls never get completely "starkers" on this softcore site, but they do pose quite a challenge to your libido. It's almost as if they're saying, "Come on, fella. Unwrap me."

New content hits Only Opaques' homepage many times throughout the week. Photo galleries are added on every day except Sunday, while videos arrive every Wednesday and Sunday. There's already quite the collection here, though, with more than 2,000 galleries and around 650 videos sitting here.

Cons:
Although it's great to have access to two bonus sites included with membership, this bonus access does not extend to the other three Only sites: Only Tease, Only Secretaries, and Only Silk and Satin. These three are far more interesting than Carla and Melanie's site and having free access to them would really make the $24.95 monthly cost much easier to reconcile.

Only Opaques' streaming videos must be loaded in full before you're able to jump ahead, fast-forward, or otherwise scrub through the timeline. This can make previewing video content a bit of a pain and generally leaves you waiting just as long as you would if you'd downloaded your chosen scene. And here I thought streams were all about convenience.

Nudity is not always guaranteed here at Only Opaques, with some models choosing not to get their tits out and instead only posing suggestively in revealing outfits and the sites signature opaque stockings.

Conclusion:
Of all the Only sites, Only Opaques is probably the least likely to find a widespread audience of devotees. That's the price, I suppose, of dealing in softcore porn in which the models' legs are usually completely covered, at least for a large chunk of a given scene or shoot. Only Opaques does have uniqueness on its side, though; there aren't many sites - none that I can immediately recall - that focus on opaque hosiery and softcore teasing, so this site has basically cornered that market, however small it may be. The galleries and videos available here can be quite a lot of fun once you set some expectations aside and enjoy them for what they are. The models generally look great, the photography capturing their (mostly) natural beauty well and the HD videos and high-res photos presenting it with ample clarity. Some recent changes - model profiles, higher photo resolutions, a redesigned layout - have made this site easier to use and enjoy and, with a few further refinements, Only Opaques could be an even stronger site. As is, though, I must say it's rather underwhelming, even for a softcore site.