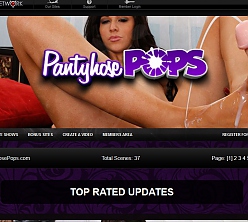 If you love a women wearing pantyhose about as much as you love a woman sucking you off, there's a good chance Pantyhose Pops will convince you that life is worth living, at least for another month. With POV-shot scenes that see a sexy slut all dolled up in the finest hosiery money can buy. She'll then attempt to seduce you with the promise of fellatio. Sometimes, though, she'll lean back and let "you" pound her for a while before accepting a hefty (sometimes inhumanly so) load of semen all over her stockings. Sign up, hose-lovers, have fun, stay safe, and, for Pete's sake, don't agree to wash any soiled stockings!

Pros:
Exclusive hosiery fetishism is what Pantyhose Pops is all about. Well, to be more specific, it's about women whose legs look great in hose getting on their knees and sucking your virtual penis. Yes, Pantyhose Pops has utilized the POV camera position to give you the feeling of really being serviced by these long-legged ladies.

Speaking of the ladies, although there isn't that many of them here yet, those that have made appearances did some wonderful work. Blonde hotties Callie Carter, Mae Olsen, and Chloe Foster appear alongside tatted-up brunette Ashton Pierce, Latina babe Layla Lopez, kinky Alice Mason, and Filipino-American Mena Li all go to work as both givers and receivers of pleasure. Some have never met a fucking machine before and are shocked!

Shot and delivered in 1080p High Definition video, Pantyhose Pops' scenes offer significant levels of detail and certainly won't prevent you from grabbing two large eyefuls of whomever is working their magic. Hitting 3000k bitrates, the most impressive videos are a treat, unlike the disappointing photo content.

Pantyhose Pops is quite the small site, but with free access to every one of the 48 other Fetish Network sites included in your membership package, you've got thousands upon thousands of depraved hardcore movies to enjoy, with new scenes arriving most every day.

Holding a mere 37 scenes, Pantyhose Pops is one of Fetish Network's smaller sites. Thankfully, it's also one of the network's newest and will hopefully grow steadily for some time.

Evil Angel director Kevin Moore has two lines of DVD releases focusing on almost exactly the same thing as Pantyhose Pops. Instead of full-leg-covering pantyhose, though, his Panty Pops and Spandex Loads releases cover significantly more or less skin and don't feature sheer-wear as often as this site. That difference (and a fish-eye lens) aside, Moore's work is a less kinky, more mainstream effort that'll be of interest to many, I'm sure.