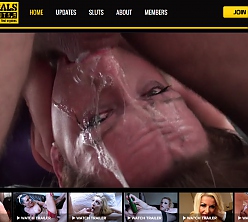 Cons:
Obviously any adult site featuring spitting, slapping, verbal abuse, and brutalizing sex acts won’t suit all tastes. Those who like rough sex without the humiliation and harassment may find Pascal a bit too liberal with the abuse of his partners. Some women - hello, Georgie Lyall! - are so damn gorgeous they look like another creature entirely when Pascal’s done with them.

One of the acts most commonly cited as a high ranking most-hated fetish is the writing of words and phrases on women bodies. While Pascal only occasionally pens a chest-mounted missive in black marker he and producer Andy liberally stamp their sites logo on the models bodies. Isn’t that what a video watermark is for?

The High Definition renderings of these epic string-her-up and take-her-down meetings look very good indeed. Episodes would, however, carry more weight and impact in 4K Ultra-HD resolutions. Imagine getting an even more detailed glimpse of tears forming in the eyes of your favorite British ball-drainer as Pascal rests his nuts (just for a second) on her chin before drawing back for another forceful thrust! Bring on 4K brutality, I say!