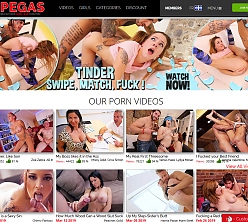 Pegas Productions might not be as busy as it once was but with more than 700 scenes already held here, there’s no real need for concern. Added to that comforting fact, new members can now enjoy half-price access. At just $14.95, this month of access is the perfect way to check out Pegas Productions without the standard commitment.

The update schedule of this once busy network has slowed down of late. Pegas used to add three or four new scenes each week but now adds only one. There’s a strong archive here so members shouldn’t be horribly concerned that they’ll run out of tasty French-Canadian smut, but a busier update schedule sure would be great to see back in place.

Somewhat garish lighting can bring the visual quality of a Pegas Production scene down a few pegs. Skin tones can become quite reddened and look a little odd, almost like a strong sunburn in its late pre-peeling stages. And, for a cold country, that’s a little off-putting. Where are all my pale, pasty snow bunnies at?