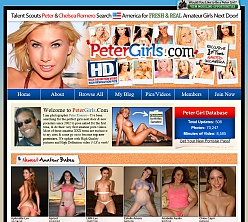 Overview:
Hef has his bunnies, Metallica had their 'tub tarts', and Motley Crue had any woman in a three-mile radius for about nine years, but there's one accomplished guy with a crew of foxy females that hasn't had the attention these other major players have received. Peter Romero is his name and Peter Girls is his game. Traveling around the USA and the world to shoot the most charming, enticing, and alluring young women he can find, Romero assembles a harem of Peter Girls, young women who Romero feels fit the 'girl next door' mold perfectly. In what he claims are their first adult shoots, the girls pose in skimpy outfits, peel off layer after layer, show off their stunning nude forms, and even engage in some rather raunchy masturbation, sapphic hookups, and boy-girl scenes that prove certain models have promising careers in XXX entertainment ahead of them. Peter Girls delivers its video and photo content with a busy update schedule and high image quality throughout. In 1080p HD videos and high-res still shots, the gorgeous array of Peter Girls stand on beaches, in bedrooms, in showers, peeling off their already minimal outfits, and devastating you with their charms both seductive and salacious. At $29.95-a-month, membership entitles you to unrestricted access and brings three-to-five HD and HQ updates each week starring "fresh and real amateur girls next door" hand-picked by Peter Romero himself.

Romero's shooting style is unfussy and quite simple. He often places his models outdoors, back-lighting them with a sunset or framing them near a waterfall or tree. Indoors he takes to bedrooms, bathrooms, living rooms, and hotel suites where things tend to get a little wilder. Some good visual variety can be found here with some content edging toward glam-porn and other updates proving more amateurish.

High Definition videos fill the Peter Girls archives, at least the more recent sections, and bring members 1080p streaming and downloadable videos while photo galleries do their part with 3000px resolutions online and zipped. Online galleries and automated slideshows are available, look very good in most cases and are surrounded by previews of each model's bonus site content.

Cons:
Clearly produced quite a few years ago, the Peter Girls website suffers from a bland, dated design and layout, Streaming videos aren't given a dedicated software player and photo slideshows are cumbersome at best. It'd be great to see Peter Girls update its facade to a more modern look and tighter functionality.

Peter Girls has taken to updating with content that's clearly not as fresh as claimed. Upload info may point to early 2017 production dates but watermarks often date back a few years, signifying a remastering program in place. Many of these older updates look a little dated, stylistically, too.

Video streaming options are limited and provide no capable in-browser player to keep things smooth and sexy for you. Instead the file just opens in a new tab and plays with limited controls. Peter Girls is one of the few adult sites still favorite WMV-formatted videos whereas most everyone else has moved on to MP4s.

While it's awesome to join Peter Girls and find another four websites but having to reenter your username and password for every site, often multiple times in one browsing session, can become pretty tedious pretty quickly. There's an awesome little semi-pro network here, it only needs to be treated as such.

Conclusion:
Online now for 13 years, Peter Girls has featured all kinds of women from mega-busty superstar Gianna Michaels to total nobodies simply trying out adult modeling for the first time. Capturing these young ladies at their foxiest and most flirtatious, Romero delivers HD videos and high-res photos loaded with flirty looks, sultry poses, and more blatant nudity than a reel of Game of Thrones outtakes. Delivering one something "new" every two or three days, Peter Romero keeps his Peter Girls site feeling fairly active and current. Some content carries dated watermarks and sports a style throwing back a few years, but it's unclear how much of Peter Girls updates are recycled (upgraded, yes, but still recycled) items of old. Most videos are now offered in 1080p HD resolutions though the use of WMV files is a little odd. Photos reach 3000px but strangely don't come in zipped sets for easy download. Bonus access to four other sites helps to increase the value of a Peter Girls membership but, really, this site will only kick your libido into high gear if you're a major devotee of nubile teen and twenty-something beauties posing nude and exploring the (to them) brand new world of shooting adult content. Everyone else will probably find Peter Girls lacking truly exciting content. A more sedate and genteel take on eager sluttiness, Peter Girls, like its models, is a flavor that will suit some, but not all, viewers.