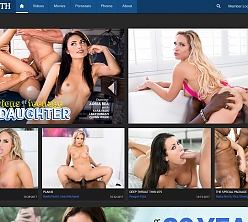 Peter North may now, after decades of bachelorhood, be a happily married man, but if his new wife’s recent activities are any indication, he won’t be slowing down his porno-shootin’ schedule anytime soon. In fact, North appears to be on the verge of a revival and where better to watch him work his viscous magic but at his official Fame Digital network site. With thousands and thousands of HD videos to be streamed and downloaded by his legion of fans, and fans of top-notch mainstream hardcore in general, North’s official home has much more to offer than huge face-covering cumshots… though it certainly has those too!

Watching someone like Jenna Haze marvel with greedy eyes at even a modest Peter North load makes you appreciate the man all the more. Also appreciating him and his cohorts are teens Jaye Summers, Katya Rodriguez, and Maya Bijou, MILFs Aaliyah Love, Alexa Tomas, and Savannah Stevens, as well as Peter’s new bride of about a year, Nadia, a bombshell blonde that’s down for some pretty extreme hot wifing.

Not as active as he once was, North’s site has also slowed down a bit of late, only adding two scenes each month for much of this year. Overall, this is hardly a big deal. There’s enough activity here to keep fans coming back but still clamoring for more. With his marriage resulting in new onscreen turns with his wife, perhaps there’s more brand new North-starring 1080p HD videos about to flood the front page.

Excellent HD video streams and downloads, and 1920px photo galleries often holding close to 300 evocative shots, come in strong supply here. Peter North’s official online video collection serves up more than 3300 scenes from 673 DVD titles. Access is also given to the rest of the Fame Digital network, home not only to North but to Rocco Siffredi, Silvia Saint, and Tera Patrick, all at the discounted rate of $14.95 for one month!