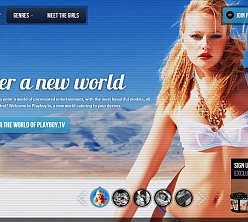 Overview:
Playboy is inarguably the most revered, respected, and patronized adult entertainment company in the known universe, perhaps even in the multiverse. With fingers (if not fists) in the lucrative pies of print, radio, and television media, Playboy is truly the reigning champion of integrating pornography into mainstream popular culture and with its Playboy.TV site now more active than ever, that dominance is only solidified. With shows like Hot Babes Doing Stuff Naked, Hardcore Partying, Celebrity Sex Tales, 7 Lives Xposed, All Nite Party Girls, and Jenna's American Sex Star aiming to keep your as erect as you will be entertained, it seems Playboy's legendary mix of glamorous photo shoots, stark nudity, and ribald sense of humor will be making its way onto your computer screen sometime soon. That's assuming you're down to pay $29.99 for a month-long stint at Playboy.TV, of course, so why don't you tag along as I, Mr. Pink, delve into the slick new Playboy.TV site and assess its worth?

Looking great in High Definition streams and downloads, Playboy.TV's episodes reach 720p resolutions and offer plenty of detail and clear visions of the incomparable beauties they capture. Streams offer fluid buffering and playback while downloads bring the absolute best quality versions of these shows to your computer screen.

Normally costing you about thirty bucks, Playboy.TV isn't exactly cheap. Only, yes, it is, as long as you buy your membership through Mr. Pink's - I've snagged a deal that'll get you inside for only $14.95, a pittance! And you'll also get free access to a nearly 2,000-title DVD archive, too!

Cons:
Playboy.TV's recently redesigned interface works beautifully on tablet and touchscreen devices, but can be somewhat cumbersome when viewed on a desktop or laptop computer. Scrolling menus and displays lend themselves not to mouse and keyboard operation, but gestures, swipes, and selections made by fingers.

When browsing the collection of shows available here, it's easy to miss many of the more prolific programs, therefore missing out on a huge chunk of Playboy.TV's total archive. A small indicator could easily be added to instantly show passing members how many episodes of carnal comedy or debauched drama they could be gawking at, preventing this neglect.

Many of Playboy's television programs are bland, humorless, and trite with forced sexual displays no more convincing than most drag queens. Tera Patrick's School of Sex is especially dire, with the host delivering her lines basically in monotone and completely devoid of any natural cadence or feeling.

The only photo galleries you'll find at Playboy.TV are devoted to specific models and appear on their profile pages. Most galleries that appear alongside shows and episodes contain not photographs but screencaps and no magazine pictorials are to be found anywhere on the site.