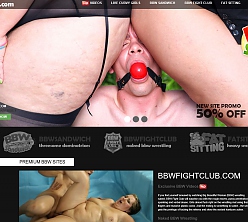 The heavier-than-thou women of Plumperd should be commended for simply being themselves and proving a confident woman of any size can be insanely sexy. Notable performers include Jitka, Monika Blond, Mira, Dominika, and a whole bevy of single-named European honeys throwing their weight around for hardcore thrills.

Cons:
Plumperd's archive isn't anywhere near as abundant as its models bodies. Holding only 50 scenes at writing, Plumperd is far too small for a four-site network, even one dealing in this semi-obscure niche arena. As part of the Stockerz mega-network, Plumperd could be offering a lot more than it is now.

Not only is the archive small but updates are irregular and infrequent. Some months see weekly network installments while others see the schedule drift off into a less fulfilling state of affairs. Some Plumperd sites suffer from lazy updating more than others with only Fat Mams seeing updates so far this year.