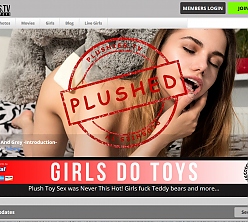 Plushies.TV is most definitely among the more unique solo female sites out there. With few serious competitors, Plushies.TV manages to carve a sweet little niche for itself and bring members both HD and 4K video content in the process. Not bad at all for such an odd sexual practice!

Weekly updates bring a strong slate of new content to the site every month. The current archive may be quite modest but there’s enough variety to keep any devoted plush-addict coming back for another foxy fix. Although a bit on the expensive side, monthly access is discounted for continuing members.

Cons:
Charging nearly $40-a-month (without multi-month commitments), Plushies.TV is definitely asking quite a lot for its content. With the archive only holding 77 videos and barely more than 100 galleries, there’s not exactly a wealth of stuff to see here. If you’re not immediately taken by the premise and treatment of plush fetishism, you won’t likely be won over later.

Plushies.TV content has seen some variation over the sites existence. Earlier content is saddled with giant watermarks that most definitely annoy and distract you from your otherwise colorful viewing. Some photography can also come through a bit bland and lifeless even with typically great use of natural light.