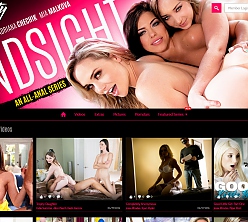 Your porn viewing can range from the tepid to the torrid in the space of fifteen minutes. Face it, you’re Pretty Dirty. A site fit for anyone who’s ever doubted their sanity after a more lurid than usual fantasy fap session, Pretty Dirty and its 200-plus HD scenes of sexual and social depravity pack a hell of a lot of heat into each 1080p frame. Having lost a little steam lately, this epic site could be on the wane - or is it being replaced by a site to which its members already enjoy access? The whole sordid affair is explained herein!

Overview:
Porn can be highly explicit, holding nothing back visually, and it can be cheaply shot and amateurish, lacking a professional sheen and style. It can dive deep into hardcore physical abuse, bringing in ropes, chains, whips, and anything else handy. At Pretty Dirty, a fairly new and very interesting adult site, breaking taboos and indulging in fetishistic fantasies is the name of the game. Pretty Dirty advertises itself as a “playground of those who are naughty at heart, where forbidden fantasies come to life.” Hey, they ain’t lyin’! One look at the tour pages and words like “step-daughter” and “betrayal” and “virginity” flash before your eyes. Dark shadows, bold lighting, and distinct characters fill Pretty Dirty’s tales of sordid and morally-questionable sexual misadventure, making every 1080p HD episode its own little mini-epic. Pornstars who not only fuck at a high level but who also pull their weight dramatically - including some truly legendary adult performers like Ariella Ferrera - make an already appealing concept even harder to pull away from. (Kinda like that one person, coworker or neighbor or in-law, you’ve been on the verge of fucking for years but always manage to resist.) At the going rate of $29.95-a-month, membership to this outrageous illicit affair is a sin this reviewer can definitely endorse.

A very impressive roster of performers fills Pretty Dirty’s many pages. The younger women and men do a very capable job with some pretty demanding roles: an overly lecherous step-brother, an older sister grooming herself a whore, and literal mother-fuckers, for a start. Standouts include Reena Sky, Ashley Adams, Gina Valentina, August Ames, Ryan Rider, and Damon Dice.

Home to more than 200 episodes of kinky everyday adults enjoying lusty encounters, Pretty Dirty and its bonus site, Pure Taboo, make a mighty neat pair. With 188 photo galleries also on hand, one month, your first, inside Pretty Dirty is a steal at $14.95. That price only lasts thirty days but that should be more than enough to convince and corrupt most viewers.

Cons:
Updates were once arriving here every five days or so. That all changed in mid-June and, since then, nothing new has been added. With 206 scenes in its archive, Pretty Dirty seemed like it still had plenty in store for its devoted fans. Was this a quick flash-in-the-pan attempt to cash in on the social kink trend?

Having only launched in mid 2016, you might have expected Pretty Dirty to wrap its beautifully shot narrative hardcore in 4K Ultra-HD containers. Alas, no 4K program was ever in place here and, with the lack of recent updates, it seems a little too forgiving to keep hoping the delays is due to a massive 4K upgrade!

Conclusion:
Stalling its updates a few months ago, Pretty Dirty has taken this reviewer by surprise. Just as it seemed to be really establishing itself within its chosen niche, finding a groove and style that really worked, the updates stopped arriving. Sitting at 208 scenes, the archive nevertheless offers some very enjoyable and defiantly kinky arrangements. Thankfully, though the sex remains the focus, story, character, and atmosphere aren’t neglected by the highly skilled directors and crew. Pretty Dirty would obviously look incredible in 4K and it’s a shame it will likely never get there. Pure Taboo is handed to subscribers as a very worthwhile bonus but you can’t help but wonder if that site is taking over from Pretty Dirty or that you wouldn’t be better switching the paid site and the bonus… just in case. Taken on its own, Pretty Dirty remains compelling both carnally and dramatically, something that can’t be said about many adult sites at all.