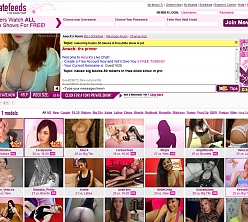 Inviting you in for a discreet and decidedly personal carnal conference, the women of Private Feeds use every feminine wile in their arsenal to bring you to your knees. Once inside, though - and Private Feeds is free to join and peruse at your leisure - you'll no doubt find yourself struggling to justify spending twenty bucks on a woman who may or may today be inclined to show off the expansive asshole her profile comments so rave about. It's far too hit-and-miss here at Private Feeds to guarantee any real success. But, hey, if you wanna make it virtually rain on an entire world of women, you might as well start here.

Pros:
With more than 5,000 women and couples on its roster, Private Feeds is an enormous site loaded with small but intriguing photo galleries, the models' profile pages, and some prerecorded video content. The women are of various body types, personal styles, and backgrounds, coming to Private Feeds from throughout the Internet-connected world.

Cons:
Although it's free to join Private Feeds and look around, sampling a few free shows here and there, actually participating in webcam shows and sessions gets very expensive very quickly. Tokens might only cost $10 for 40, but with most performers charging 8 or more tokens per minute, you can quickly drain your funds with just a couple of shows.

Most of the 5,586 models currently registered as Private Feeds performers are no longer active. In fact, during the hours I spent reviewing this site, the greatest number of women online at any given time did not exceed 85. Of those women, only about 15 were equipped with HD webcams.

If you want to actually converse with your favorite Private Feeds models… good luck. Most of these women are conversational in English, but there are plenty who can barely string a few sensible words together, creating some difficulty in submitting to them your sexual requests and just generally creating any kind of bond, however temporary.

Although they're labeled "HD" and offer larger viewing frames than most other Private Feeds broadcasts, the "HD" cams certainly aren't of a High Definition standard you'd recognize.

Conclusion:
Private Feeds runs on a fairly simple and very common program: women from around the world open up their lives and sexualities to you via live webcam broadcasts. It's free to join Private Feeds and have a look around, but actually getting the most out of your membership can cost you a doggone fortune in tokens. Video quality is good throughout the site but never manages to really impress in the way those "HD" logos attached to some of the preview screens seem to suggest. Performers are generally quite friendly and excitable (at least when you're paying) and sessions can get pretty wild if you choose your girl correctly. Unfortunately, the girls can be as enticing as they like, but with costs hitting substantial heights in very little time, one has to wonder who's paying for all these private shows and how many banks they robbed to fund such a vicariously sexual expedition.