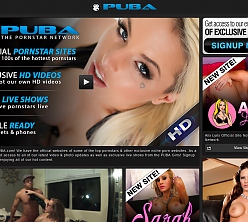 Now home to almost 1200 scenes, many of them exclusive, original Puba productions, this network is really booming! New content is being added (although on an unknown schedule) and a discount is now in place (courtesy of yours truly, Mr. Pink) that'll buy you unfettered access to everything Puba has to offer. The price? Just $9.95!

Cons:
Content doesn't carry dates of upload here, leaving us to guess when it arrived at Puba HQ, when it was shot, and if it's part of a current production schedule or something pulled out of Puba's back catalog. Many sites see months pass between updates, growing very slowly indeed, and leaving fans underfed.

Galleries and scenes open and play in a pop-up window, cannot be opened from a provided link in a new tab or window, and result in uncomfortable, clumsy viewing. This setup cuts down bandwidth consumption by very nearly forcing members into checking out updates one-at-a-time, but it's hardly the most fluid way to enjoy Puba's often excellent smut.