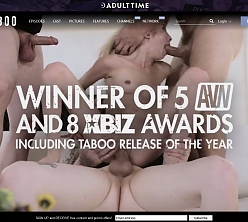 Pros:
Home to a wide variety of seriously perverted scenarios producing impressively debasing, debauched sex, Pure Taboo celebrates the kinds of arrangements most sites steer clear of. A teacher insists on a meeting with the step-mother of an unruly female student then demands to watch said step-mom administer physical discipline or see her daughter expelled. These kinds of setups can go awry but at Pure Taboo, they’re expertly crafted.

Updating twice weekly with both video and photo content, Pure Taboo’s visuals now reach 4K Ultra-HD video resolutions that bring amazingly vivid sex to your screen whether mobile, desktop, or TV. The dark and moody look is represented very well in 4K, though the 1080p HD videos are no slouch either. Whether streamed or downloaded, Pure Taboo’s unique look comes through beautifully.

Those viewers who love hot, sordid sex but aren’t exactly clamoring to watch storylines ending with dad, brother, and grandpa all busting a load on a the spanked-raw ass of a whimpering young woman may find Pure Taboo just a teeny, tiny bit too ridiculous and socially outrageous to really get much pleasure from it. Likewise, if you prefer not to deal with lengthy narrative scenes on either side of the sex, Pure Taboo isn’t for you.

Pure Taboo’s dark and atmospheric visual style won’t suit everyone, either. Many commenters note that they find the scenes too dimly lit and discolored. Such opposition from some audience members is all part and parcel of being a true artist, I suppose, and Pure Taboo is nothing if not a bold artistic statement.

Unlike most other sites on the Adult Time mega-network, Pure Taboo doesn’t lack in text descriptions. In fact, this site has the opposite problem: scene synopses are way too long to be useful in helping you succinctly decide which scene you’ll next have you pants-less and panting. They’re much closer to full script treatments than they three-or-four line summaries that would be genuinely helpful.