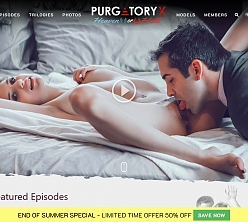 Overview:
It has been said many, many times that we now live in the second golden age of television. Streaming platforms host mammoth catalogs and industry leaders like Netflix, Hulu, and HBO are creating some of the most universally acclaimed shows of all time, some of them dealing with dark takes on human experience. PurgatoryX seems to be aiming for something of a porn-drama series hybrid, producing multi episode storylines loaded with sordid hardcore fucking. From the twisted creative mind of Donnie Rock, PurgatoryX presents its viewers with two main options: heaven or hell. Heaven brings you angelic beauties lovingly servicing their partners or picking up a new one for some serious personal satisfaction. Hell sees darker atmospheres and more aggressive sex built around seriously taboo scenarios. Starring the likes of Ashley Adams, Jaye Summers, Vienna Black, Kenzie Reeves, and Cherie DeVille in some of their most dramatically and sexually demanding roles yet, PurgatoryX, which charges $29.95 for monthly access, is an intense take on an age-old divide.

Experimenting with other women, a second man, or a total stranger they really shouldn’t be messing with, the women of PurgatoryX throw themselves into raunchy sexual situations and take intense poundings from Donnie Rock, Charles Dera, Codey Steele and a hand picked group of other guys. Some restraints are used from time to time with Ashley Adams delivering a scorcher with two cocks inside her and a belt around her neck.

PurgatoryX’s archive may not be the largest around - the site currently holds 46 scenes - but weekly updates keep it growing steadily. And, now that monthly membership has been discounted to an amazingly affordable $9.95, there’s no reason anyone interested in PurgatoryX shouldn’t feel comfortable and confident in indulging.

Cons:
Stylistically similar to its apparent sister site ToughLoveX, PurgatoryX nevertheless fails to provide its members with free access to that site. There’s also no bonus tube selection to show off its wares or entice members to cross over. With a modest archive of its own, PurgatoryX could use some beefing up and ToughLoveX offers a great way to do that. Or, at least, it could.

The Hell content can get quite aggressive with lots of choking, forceful sex, and demeaning dialog. I mean, that is the point of having both Heaven and Hell categories but both styles lean darker than most other adult sites. Heaven sees relationships fall apart and be brought back together by the inclusion of a new lover or some partner swapping that isn’t without its tension.

PurgatoryX is by no means a huge site. Holding just 46 scenes, the vast majority of them connected to others in their series, there just isn’t a whole lot of exclusive, unique content here. What is here is utterly brilliant, to be sure, but hungrier viewers will be left still hungry after a stint here.

Conclusion:
Any site giving Ashley Adams two big dicks to play with, wraps a belt around her neck for added control and kinkiness, and does it all in glorious 1080p HD is good with me but PurgatoryX’s highly creative and unique concept deals with such a span of human sexuality that it’s bound to please most any porn fan. Sure, 46 scenes isn’t a whole lot of viewing and the lack of bonus content from or access to ToughloveX is also disappointing, but PurgatoryX’s stunning 1080p HD episodes bring such inventive and steamy sex to your screen that the somewhat low content count will hardly matter. Weekly updates keep the site growing steadily and the growing cast has so much sexual dynamism to offer it’s almost inhuman. PurgatoryX has only just begun but it’s already well on its way to legendary status.