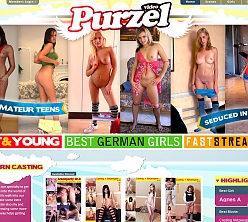 Purzel rockets out of German with an archive of nearly 200 hardcore scenes starring fresh newbies as yet untested before a camera. There isn't much more to Purzel, come to think of it, nothing that'll have you rushing to join anyway. Struggling to gain footing in such a competitive field in spite of representing a normally underrepresented niche - Germans! - Purzel now needs take a good look at the proverbial man in the mirror.

Many of Purzel's videos reach High Definition resolutions in their streaming containers. At 960x540 pixels, they're not as strong as 720p or 1080p HD videos, but they're certainly a damn sight better than what would otherwise be here. Photos fare somewhat better with three resolutions available, the highest of which offers ample detail in its 2000px frame.

Purzel is currently offering a discounted monthly membership that provides full access at the low cost of $14.95. Whether or not Purzel actually deserves your hard earned money remains to be seen, but the offer is certainly welcome and there's no telling how long it'll last, so if you're keen snap it up pronto.

Cons:
Even Purzel's content labelled identified as "HD" fails to reach 720p or 1080p resolutions, instead sitting at 540p and 576p. Interlacing is rife throughout most scenes and simply won't go away without a proper video remaster. This creates a mess of busier scenes with blurred motion and lines cutting through the image.

Purzel's videos can only be streamed, not downloaded. This is most unfortunate and leaves members with no choice but to remain an active member if they wish to see a single frame of a Purzel video. Needless to say, adding downloads would be a great move on the part of the webmaster.

Although Purzel is only one part of the Stiffia Network and there is half-a-dozen other European sites online and vying for your attention, access to these sites is restricted to their paying customers and no network access is provided. This is especially disappointing considering there's less than 200 scenes at Purzel itself.

None of Purzel's content is posted with a date attached, leaving members with no idea when it arrived or when the next installment in the continuing saga of Purzel will be. Adding a little swab of text baring the date isn't an especially tough job, so hopefully that'll appear sometime in the future.

Conclusion:
Well, folks, if you were getting all excited about a possible stint as a Purzel member, you might wanna think twice about that particular purchase. Even at $14.95, Purzel fails to offer anything more substantial than some mediocre German fuck flicks starring unknown women, many of them quite babelicious even if the others aren't. Sporting 184 scenes, Purzel's archive is not exactly huge but could certainly be even more lacking. Updates are not dated and arrive on an undetermined schedule. When photo galleries are present, they offer 2000px images that are clear and strong, unlike the videos. Rife with interlacing and barely HD even when they make it to an acceptable resolution, Purzel's videos, which are also streaming-only, fail to make a very strong impression, just like the rest of the site.