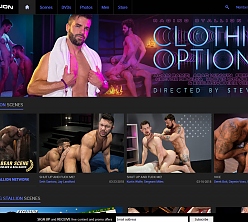 Kicking open the stable doors and throwing the nearest hot-assed colt to the ground is Raging Stallion, an all-male megasite detailing the sexual adventures, carnal experiments, and lustful unions of a throng of sexy, studly, stiff-dicked men. Promising its viewers HD video streams, exclusive updates, and more cock-stuffing hardcore than you’ll know what to do with, Raging Stallion is a steamy site that, a few problems aside, has plenty to offer.

Overview:
At some point during my development, I saw a movie on TV at a friend’s house that featured a scene in which an untamed horse thrashes and brays against its handlers, refusing to be restrained. “Holy shit,” I thought, “who knew horses could be such monsters!?” Little did I know that, as a male, my sexual drive would be compared to that of a horse as a matter of course. “He’s a stallion,” a woman might say after finding her perfect sexual partner. In all likelihood, though, he’s not really much like the guys of Raging Stallion, an all-male adult emporium loaded with thick, meaty cocks and the fucking-fit bodies they’re attached to. They’re not interested in pussy. Raging Stallion’s entertainment offers some of the hottest gay hardcore fucking on the planet, its hunky, chiseled models throwing themselves into the fray and slurping down every engorged guy they come across. Peeling off business suits and workout clothes, military garb and the kind of casual outfits you wear to a pal’s place for Netflix-and-Chill, Raging Stallion’s featured men include some of the biggest names (and cocks) in the gay porn world, and they’re all on display in rich 1080p HD videos and high-res photo galleries packed to the hilt with more homo-hardcore awesomeness than you can shake a stick at.

Streaming in your browser window at 720p and 1080p HD resolutions, each new Raging Stallion episode offers clear, dynamic images with the ease of embedded online viewing on your desktop or mobile device. Raging Stallion may not allow video downloads, but gone are the days when streaming left you hungry and wanting. Today, many folks can’t be bothered with downloads at all.

Cons:
Devoted streamers and cord-cutters may be pleased as punch to find Raging Stallion throwing all its audio-visual efforts behind streams, not downloads, but anyone eager to save a selection of Raging Stallion’s hottest works will be mad pissed that no video download options have been provided.

Although its videos will definitely garner more attention, Raging Stallion’s photo content is hardly a failure. Stunning, evocative shots fill the galleries and provide detailed takes on crucial carnal moments. Viewable online or via zipped download, the galleries would be awesome if not for their slight size. Most fail to offer more than 30 shots.

Digging back into Raging Stallion’s archives, you’ll find a bunch of smut that not only lacks the visual definition and style of newer releases, but also often lacks the more powerful sexual chemistry, resulting in sex that’s a little on the dull side, frankly. By contrast, newer productions tend to look a bit less realistic, more cultivated and even cartoonish, thanks to involved set design and stark lighting schemes.

Conclusion:
Raging Stallion is bound to see many prospective members turn away in search of another vendor simply for lacking video download options. Unfortunately for those viewers, they’d be missing out on a thriving collection of top-notch gay hardcore by ignoring Raging Stallion’s smut. Expertly crafted stories detailing the sordid affairs and encounters of some seriously well-endowed guys are standard here, and HD streams deliver 1080p visions of masculine carnality to members’ screens. It’d be great to see downloads made available, even if only for a small selection of featured scenes, and photo galleries packed with more saucy shots, but anyone looking for a streaming-only homosexual hardcore carnival could do a shit-ton worse than examine every digital inch of Raging Stallion’s online fuckfest.