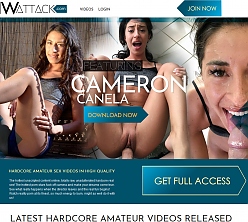 High Definition streams bring all online viewers crisp, clear views of the sordid backstage action. Downloaders win out, though, with awesome 4K Ultra-HD videos available. At a 2160p resolution, these 4K videos load up your screen with ample detail and do their best to transport you being the lighting rigs and sand bags for a vivid backstage romp.

From athletic young sluts like Paige Owens, Jaycee Starr, Jessie Lee, and Lexi Lore to the MILFier, more mature and experienced women like Kit Mercer, Julia Ann, Lauren Phillips, Valentina Nappi and Kenzie Taylor, the cast of Raw Attack packs a ton of talent into one site. Some even give their most compelling and naturalistic performances here at Raw Attack!

Scenes often start with the last moments of the performer’s previous workaday fuck session. Following the girls to the bathroom for interviews is fun and quite revealing, but it’d be great to see a bit more BTS footage from that first sex scene to help set the stage for what’s to come. Knowing the load she’s cleaning from her forehead was real and landed only moments ago would add plenty of filthy authenticity.

Some girls are hotter than others. Some girls are much more charming and interesting than others. I’m not saying Raw Attack’s models are dull but some are clearly more exciting and intriguing people to engage with. The backstage conversations can be flat or full of juicy personal details the models usually keep to themselves.

Conclusion:
Raw Attack appeared out of nowhere about a year ago and seemed to suggest the folks at Spizoo were on a creative kick. An intriguing concept on paper that’s even better in MP4 form, post-scene backstage interviews and sex makes for a very intimate and fun experience for home viewers. Of course, it doesn’t hurt that HD and Ultra-HD videos are on hand - and looking quite stunning! - to push these unscripted hookups to the next level, visually. Sexually speaking, there are a few performers who seem to be going through the motions but most seem very keen on taking another dick after finishing one scene and wiping the load from their eyes. Raw Attack’s brilliant concept allows for plenty of dirty talk and verbal interplay between the (mostly) unseen guy and his latest conquest. With 100 scenes and weekly updates, there’s quite a lot going on here. Even without free Spizoo access Raw Attack has a very special appeal that the truly insatiable will really appreciate.