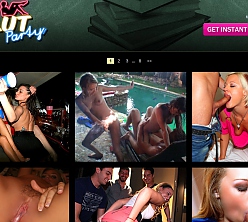 Just what on Earth does a Real Slut Party actually entail? If the Mofos site of the same name is to be believed, one such shindig will see everyone doing anything they (or anyone else) can think of to make it a night to remember. And it'll be one you'll remember, too, what with all the naked female bodies flying around and attaching themselves (sexually) to each other and whatever stiff dicks happen to be around. A Real Slut Party can take place in a bedroom, ballroom, nightclub, or the sunny surroundings of a Hollywood Hills estate and it can include two, three, four, even nine girls. So, dear reader, are you ready to fucking party or what?

Real Slut Party isn't just a thrilling site of its own, it belongs to the illustrious Mofos network, on which you'll find another 14 exclusive sites devoted to reality-based hardcore smuttery. Sealing your fate, there's also a discounted membership deal currently on offer that'll get you inside Real Slut Party and the Mofos empire for only $19.95 monthly.

Cons:
Shot as they often are on dancefloors and in the midst of a dozen partygoers letting their freak flags fly, Real Slut Party scenes can be hard to follow, visually speaking. Camerawork is usually serviceable but sometimes loses its focus and drifts from the action you'd much rather be watching to show, like, some dude's foot or the back of a girls' head for a little too long.

Unless you manually request the main scene index of Real Slut Party show descriptions of the available scenes, you won't find anything resembling a synopses or rundown of the action anywhere on the site. Even each scene's viewing page has neglected to offer such info. Categories could and should be tailored to this site more than they currently are and keyword-aided browsing could use a boost.