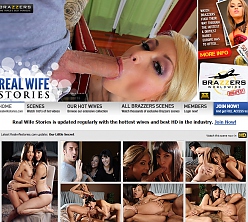 Your own marriage might be dull and joyless, but there's no sense in discard the idea of a legally-binding union between two adult humans just because you chose poorly. Perhaps if you'd chosen, say, Julia Ann or Raylene or Chanel Preston you'd be living an IRL Real Wife Stories adventure that would see your dick sucked, ridden, and emptied by all three beauties (on separate occasions, too.). Or you could be on the other side of these unfathomably lusty encounters, in the role of a cuckold who has no choice but to sit back and watch as his amazing, exquisite wife lowers herself to the level of common gutter slut. It's marriage, Brazzers-style. It's Real Wife Stories. And it's asking for your hand.

In addition to being housed on a site loaded with navigational bells and whistles, each Real Wife Stories scene can be viewed online or offline in still or moving images, in a range of quality and resolution standards that reach all the way up to 1080p High Definition MP4 video frames and 2491px photos, both of which offer significantly high levels of detail.

There's a new scene arriving on Real Wife Stories' homepage every Saturday morning - just like your childhood cartoons! - and, with more than 300 scenes already online, it's not there isn't plenty to enjoy already here. Variety is also strong, with scenes centered around cheating neighborhood slut, bitchy and dominant bosses, or the overly friendly new wife of the company boss all framing the sex in somewhat realistic (but kinda nutty) situations.