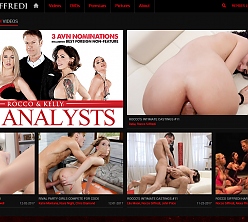 Rocco was already delivering through this site a parade of very strong HD videos but now, thanks to a recent upgrade, much of his new content arrives in truly awesome 4K Ultra-HD video packages. Streaming and downloading at 2160p, these epic encounters offer amazing detail and give you a close, personal taste of Rocco’s enviable workaday life.

New scenes hit Rocco’s homepage three or four times each month and though the schedule could be a little tighter, there’s a very healthy collection of the man’s work here, almost 3000 scenes! Add to that haul free access to dozens of other Adult Time websites and factor in the current discount offer of one month’s access at $14.95 and this is a damn fine deal.

Rocco can get quite aggressive with his partners, as can the other guys he ropes in to help fuck his stellar female cast. Though most women seem to relish the chance to let their freak flags fly just that little bit higher and prouder, some don’t take Rocco’s sexual onslaught so well and become shy or timid in the face of such sexual power.

Rocco’s work really does shine brightest when the man himself is doing the deed onscreen. Other men offer adequate performances and prove reliable substitutes but none really match Rocco’s intensity nor the chemistry he conjures up with so many of his co-stars. Rocco really is in a league of his own.

Once part of the Evil Angel online empire (and perhaps it is still), Rocco Siffredi’s official site is now part of Adult Time’s teeming roster of (mostly) excellent adult vendors. Adult Time is quite an odd network, though, and may not be as forthcoming with the full catalog of Rocco’s work as his previous Evil Angel-operated outfit.

Conclusion:
One of the few men in porn to command the utmost respect of their peers and their audience alike, Rocco Siffredi continues to deliver powerful, conceptually rich hardcore entertainment. Now, with his Fame Digital cohorts, part of the Adult Time network, Siffredi’s official online AV outlet continues to impress on a number of levels. The fairly recent arrival of 4K videos should have Rocco’s female fans damn near losing consciousness and the male viewers should marvel at just how immersive and visually potent his awesome POV shoots are in Ultra-HD. With close to 3000 scenes online and a wealth of additional content, much of it seriously world class, available via Adult Time, there’s really no reason not to indulge in a membership to Rocco’s online sex parade. The man’s a legend and deservedly so.