Home · Round and Brown 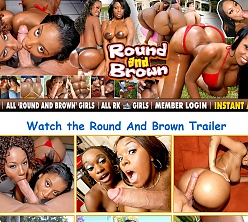 Round and Brown review

Overview:
Whether you're a white guy livin' large in the Western World, an Asian (in Asia) interested in peoples and cultures you don't normally encounter, or a black guy who knows that the sisters have every pretty-faced, perfectly poised white girl beaten, hands down, when it comes to being Round and Brown. A Reality Kings site concerned with the rear-ends of African American hotties who apparently love showing off their incredible figures for the HD Reality Kings cameras. You, you lucky dawg, can enjoy a wide range hardcore porn starring a completely African American female cast who, it must be said, are undoubtedly "blessed" in many departments. From thick ass cheeks lathered in oil and made to twerk, to skin-tight bodysuits turned see-through by a garden hose, to clit-licking bi-babes who please their girlfriend while taking dick from behind, Round and Brown aims to have you well and truly favoring black girls. The promised High Definition movies see the backsides of Bethany Benz, Teanna Trump, Jada Fire, and super-hot newbie Priya Price as they ride some of porn's biggest dicks in 1080p High Definition movies done in that tried and true Reality Kings style. Short of paying $24.95-a-month to sign-up and explore Round and Brown, the only way to find out just how worthwhile this all-black Reality Kings efforts proves to be is to tag along with me, Mr. Pink, as I peel back the heavy doors of this booty-bouncin' site and dive right in!

Pros:
If it's black girls you most enjoy watching, Round and Brown has exactly what you're after, a large and lust-filled roster of super-hot black talent. Newcomers like Nicole Bexley, Priya Price, Nova Star, Camille Amore and Layton Benton join some of the most popular and sexually potent black performers of all time: Yasmin De Leon, Vanessa Money, Misty Stone, and Jada Fire, the latter in six scenes!

Round and Brown manages to add a new episode every Friday, adding to the strong 602-scene collection already here. Each episode brings both photo and video content to your screen in the colorful Reality Kings style and ensures you're never at a loss for thick, juicy, bouncing black backsides.

Those willing to pay for a Round and Brown membership - which can now be had for just $17.95, discounted from $24.95 - aren't forced to watch black girls' asses in full flight. Full Reality Kings network access is included for all paying members, allowing access to another 44 Reality Kings sites.

Cons:
Shooting black performers isn't the same as shooting white performers, or even Asians. Skin tones are darker and lighting must be tailored to cut down on excessive shininess, reflection, or detail loss. Throwing two dark-skinned models together can result in their being somewhat visually lost or muddled.

Reality Kings sure has a flair for the outrageous and Round and Brown's models often dress in outfits that are, frankly, pretty out-there. From pink-and-purple body-paint coverings to spandex athletic gear, day-glo raver outfits, swimsuits, lingerie, and figure-hugging dresses, some outfits prove more attention-grabbing than the girls that wear them and end up a distraction.

Some guys are better hardcore performers than others and, unfortunately, Round and Brown features quite a few guys who seem more interested in cracking jokes, mugging for the camera, and proving himself "down" with black culture than, you know, doing a good fucking job.