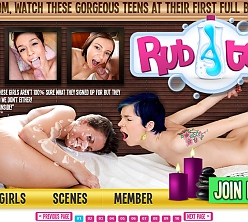 Overview:
Until they've turned 18, teens are well and truly off-limits. We all know that. Those who've passed the threshold of their 18th year, on the other hand, are now adults in every legal sense of the word and can vote, enlist, be tried as an adult in every state of the Union, and fuck whoever they want, whenever they want, wherever they want, and for whatever reason they want. Attention? There's plenty of guys eager to heap attention and affection on slutty 18 and 19-year-old girls enjoying their newfound adult freedoms. Rub A Teen presents massage scenarios that soon turn hardcore, moving from delicate but strong-handed manipulation of the girl's muscles to explosive penetrative sex in less than thirty minutes. The girls waltz into the room and lay down on a massage table only to find their masseuse has decidedly raunchy intentions. Promising both "full body" and "full release" massages, Rub A Teen is one of Team Skeet's newest success stories. It comes at a cost, though, and that cost is $28.97 per month for access to this particular teenaged sexual wonderland. And, with promises of nineteen free bonus sites littering the tour pages, it seems that, like the titular babes themselves, Rub A Teen is full of pleasant surprises.

Shot in 1080p High Definition formats and delivered in MP4s peaking at the same resolution in streams and downloads. Much like the photos that accompany them in zips and galleries, these videos offer detailed shots of the incredible young bodies sprawled out across the massage table, opening for their new physical therapist to give some slightly more internal attention.

As part of the Team Skeet network, Rub A Teen grants its members full access to the other 19 sites Team Skeet currently runs, with more sites to be added soon. And, as if this wasn't a solid deal already, Mr. Pink has negotiated a deal that'll keep your costs low and allow you entry for only $14.87!

Cons:
Quite a small site, Rub A Teen only holds 63 scenes and shows no signs of ramping up its weekly update schedule. The 63 scenes offer some strong fucking and some (if not much) variety, and network access makes a great backup, but there just simply isn't enough Rub A Teen content online.

Rub A Teen's photo content reaches a top resolution of only 1050px and is dwarfed by the similarly-styled works from numerous Euro hardcore sites, many now pushing well past the 5000px mark and delivering far more detail in each frame.

There's so little information about the models to be found here, it's almost like you're flying blind. First, but not last names are given and there's occasionally a reference to the girl's country of origin, but that's about all the info you can expect.

Ads litter the Team Skeet network and clutter the Rub A Teen homepage with banners, animations, and promo graphics drawing you not to the Rub A Teen models, but to another site entirely, sometimes even a Team Skeet site you can already freely access!