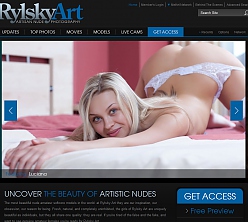 Rylsky, whoever the elusive erotica photographer may be, is billed as "The official home to Met Art's top photographer," and judging from the tour page imagery, I'd say that's a fair claim. Rylsky Art, an "artisan nude photography" site online since 2012 brings the focus away from Met Art's more general erotica to the charming, colorful, and undeniably naive photographic works of this Russian artist and his roster of incredible all-natural European beauties. Art appreciation couldn't come any more arousing than this.

Overview:
Little is known about Rylsky, the figure behind Met Art Network's charming erotica site Rylsky Art, and when compared to fellow Met Art pornographers Holly Randall, Michael Ninn, and Viv Thomas, he's practically the J. D. Salinger of pornography: a recluse having little to no contact with fans or media. Rylsky Art, then, is the only real way to enter the mind (and libido) of this notable European photographer. Rylsky Art focuses on showing nude young women in a more natural state than most porn endeavors, ditching the heavy makeup and inflated breasts for small, pert boobs, a clean and fresh look, and intimacy most sites never even approach. Part of the illustrious Met Art Network, Rylsky Art has been active since early 2012 and should now be solidifying its content into a substantially large online exhibition of Rylsky's finest work. Shot in HD and delivered in 720p and 1080p resolutions, videos seem right on par with photos, which are also guaranteed to be high-resolution and shot in all manner of environments. Comfortable outdoor frolicking sits next to bondage-inspired bedroom seductions and adventurous art pictorials usually seen in classy, glossy publications. At $29.99-a-month, Rylsky Art seems as good a way as any to scratch your erotic itch with gorgeous solo girls doing their best to inspire your strongest, most imaginative fantasies yet.

You won't find Rylsky's models choking on erections or struggling to breath through a second wave of blowbang facials. This softcore site celebrates the physical beauty and inner sensuality of its models, inviting them to seduce their viewers with ample eye-contact, flashing, flirtation, and, (usually) finally, full nudity.

As a world renowned photographer, Rylsky shooting in high resolutions makes total sense. Here at Rylsky Art, galleries host 1024, 2048, and 4500px images, the latter offering extraordinary definition and giving you incredible visual access to the curves and crevices of the stunning bodies featured here. Videos can be downloaded or streamed at 720p and 1080p HD as well as non-HD resolutions.

Ensuring every reader with a fondness for European hotties gets a chance to enjoy Rylsky Art, Mr. Pink's has negotiated a deal that'll get you inside for only $19.95-a-month. With more than 500 photo galleries, all of them original Rylsky creations available exclusively here, and a supplementary video archive, and with updates coming along throughout the week, Rylsky Art is a lively place to be.

Cons:
A number of vocal members have complained that Rylsky's video work is not on par with his photography. Videos, they claim, are shot with little attention to continuity or the viewer's experience and instead seem cobbled together from hours of uneventful shooting. Quick cutting and pushy zooms prevent you from taking in long, lusty views of the models.

Buying your way into Rylsky Art costs and extra ten dollars per month if you only want a 30-day pass. At nearly $40 for a single 30-day stint, and without included Met Art Network access (each site costs extra), Rylsky Art is, or at least can be depending on your preferences, quite an expensive little habit.

With 520 photo galleries thrown online since 2012, it might seem like Rylsky Art is a large site and growing rampantly. That's not quite the case, though, as photo updates hit on an almost daily basis but videos are added only occasionally and don't seem to have been selected for production with any specific reason in mind. Why can't we see video counterparts to some other galleries, too?

Rylsky Art holds only 49 videos, putting video fans at a severe disadvantage. Photo galleries number in the mid-500s and really put the video offering to shame. Will Rylsky's videos always play second fiddle to photos? Let's hope not, as improved videos would really propel Rylsky Art onto another level altogether.

Conclusion:
Rylsky's erotica photography is a good fit for the Met Art Network. More colorful and cheerful than his fellow Met Artists, Rylsky brings a fresh, teen-porn-inspired approach to erotica. Image quality is generally pretty high through the archive, with videos in 720p and 1080p HD, and photos in three sizes, the largest of which (5616px) offers simply stunning detail: you'll be counting tiny hairs on your favorite model's shoulder for hours. Rylsky Art is, however, a fairly small site. Although the photo archive sits comfortably at 529 galleries, the scant 49 videos aren't doing so well. There's also a degree of passion missing in Rylsky Art's work. Bright-eyed models seem excited to be posing, sure, but they don't exactly seem aroused. Depending on your preferences, Rylsky Art can also be fairly expensive and continues to keep other Met Art sites at arm's (or money's) length. As part of Met Art Network, Rylsky Art works very well, but taken solely on its own merit, it frankly seems a little dull and underdeveloped.