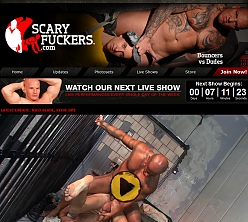 Strangling, choking, slapping, and pounding the hell out of any twinky little fucker that dares cross their path, the aggressively dominant men of Scary Fuckers let no boy go unpunished and no fan of blistering, brutal gay hardcore go unaroused. High Definition videos, high-res photos, and a huge bonus network are but a few reasons to drag yourself to Scary Fuckers a.s.a.p., but if they don't convince you, well, maybe you need the Scary Fuckers themselves to make you see the light.

Overview:
Growing up, sex was presented as something we should be extremely wary of. It could damage our bodies through STDs, ruin our lives through unwanted pregnancy, and destroy our relationships, none of which would allegedly survive being consummated. Fuck, man, sex was pretty scary stuff. I just wish someone had told me that an act so daunting, imposing, and threatening could be fun and downright addictive for the very same reasons. Scary Fuckers is something of a gay equivalent to an aggressive femme domme site, only here we're presented with heavily tattooed skinhead men who won't calm the fuck down from their 'roid raging until they've found sexual satisfaction in a submissive guy's asshole. That's right, folks, Scary Fuckers pairs a twink with a bulky, hulky, hunky fatherfucker out for blood. At $29.95, membership ain't cheap, but it's well within reach. (But, hey, I'll see what I can do about the cost.) Scary Fuckers is bound to turn off some viewers, primarily those who prefer to be in command of their partners, but those who do find themselves turned on will be impossible to keep away from Scary Fuckers, that's for sure.

From top to tail, Scary Fuckers is designed to impart a sense of foreboding and impending punishment. The dark color palette and creepy background images of models like Randy Jones and the appropriately named Devil baring their teeth and giving you the evil eye make a great teaser for the main content.

Every single scene available at Scary Fuckers, all 122 of them with a new one coming each week, is available for viewing in HD formats that peak at 1080p! These videos can be streamed or downloaded and look phenomenal. Photos accompany all scenes and also look really damn good at 1280px, viewable via online galleries or downloadable zips. Add to that the weekly live shows and that's a pretty awesome smut collection!

Two other great things about Scary Fuckers: network access and discounted membership! That's right, folks, Mr. Pink's links will get you inside this site and the huge, 26-site network it is attached to, for just $14.95 a month - half price! The network encompasses the Next Door Studios sites, the webpages of Cody Cummings, Dylan Lucas, Mason Wyler, and Marcus Mojo, and plenty more thrilling gay and bi hardcore sites.

Cons:
There's no model index here, which is odd considering how integral the titular scary fuckers are to the success of the site. Guys like the heavily tattooed skinhead, Devil, provide Scary Fuckers not just with awesomely aggressive hardcore fucking, but a face with which to sell memberships by the truckload. Why they've been denied a model index and decent profile pages is beyond me.

While it's difficult to tell for sure, one gets a sense that Scary Fuckers content isn't entirely exclusive. Coming from a major gay studio as it does, it's highly probable that these DVD-sourced scenes are available on other video sites, not to mention the retail copies themselves.

The Scary Fuckers sign-up process goes by smoothly with one exception: on the page where you enter your sacred digits (i.e.: credit card details) there's a pre-checked additional trial membership to Next Door Buddies that'll initially cost you $1.95, then, if you don't cancel within three days, $29.95. No thanks!