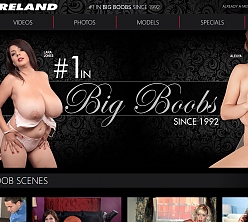 Scoreland may sound like a town in which everyone gets it on without reservation - and it very nearly is! Scoreland invites all of Score Group’s favorite top-heavy models to shoot hardcore videos and galleries for its members’ exclusive viewing pleasure. Falling a little short of today’s excavating HD video standards and failing to meet audience demand for 4K content won’t keep ardent titty-freaks from diving in headfirst, though. A virtual motor-boating session from an endless stream of gorgeous busty babes, Scoreland has tits coming out its ears.

Score Group tends to share its content around its various sites, catering to the membership of each. This does mean most of the content is exclusive to this company, but not this individual site, and may be found elsewhere throughout the Score empire.

We all love tits, obviously. Hell, it’s clear even the models themselves love tits almost as much as the audience. That said, treating the female breasts like they’re toys or sporting equipment to be tossed around, aggressively jiggled, doused in oil and squeezed from all angles doesn’t always make for the sexiest content.

Not all new updates contain new content. Many feature older scenes remastered for another go-around. This is bound to annoy those subscribers who seek a fresh slate of Score smut for their hard earned cyber currency. What’s more disappointing is that it takes away from the potency of the new content.