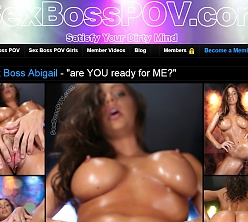 Porn and technology have always made wonderful bedfellows, each aiding and abetting the other's rise to power and prominence until they're so intertwined we can barely tell where one ends and the other begins. Sex Boss POV is evidence of porn's tight connection to technology: a site built from the ground up to be viewed on tablets and smartphones, with solo hardcore videos seeing porn's brightest newcomers fill every pixel of the vertical frame they've been allowed to play around in. Pleasuring themselves and telling you all the various ways they want you to join in, the ladies of Sex Boss POV have never been seen like this before.

Cons:
There are many small sites in the adult entertainment realm, but few as small as Sex Boss POV. Holding just 18 scenes and galleries, this site desperately needs a heavy influx of new content. That's what makes the current update schedule, which recently dropped from weekly to whenever-ly, so frustrating. Perhaps Sex Boss POV is over when it's only just begun.

Most Sex Boss POV performers slobber on and eventually straddle a molded male pelvis complete with erect penis. This leaves the girls to control and direct the action, which makes for fun viewing. Some scenes, however, see a real male pelvis in play, while others still use a fake dick first then let a real one enter and ejaculate. Some consistency would be nice.

As surprised as I was to find Sex Boss POV hosting photo content, I was equally disappointed in the stills available here in downloadable zips and online galleries. Peaking at 1462px, the images are not particularly high in resolution or detail and, numbering about twenty to a gallery, are in short supply.