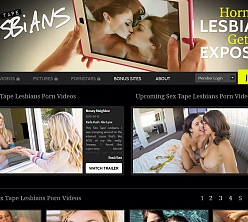 Pros:
Armed with a simple but powerful premise - "stolen" or "leaked" homemade sextapes featuring stunning young lesbian harlots - and a style that sees the performers wielding their own cameras for handheld GoPro, iPad, Smart Phone, and DSLR POV shots that place you right in the steamy action, Sextape Lesbians is a fairly original take on sapphic sex and one with plenty of entertainment potential.

Sextape Lesbians' performers may actually be bisexual or even straight, but they commit to fucking each other with ample energy and enthusiasm. Excitable young muff-munchers like Abigail Mac, Ariana Marie, Shyla Jennings, Remy LaCroix, Dakota James, and Cosima Knight spread themselves wide open and indulge in some direct tongue-on-pussy contact that is rarely left just at that act.

Cons:
Models are not given detailed profiles here, just pages with a photo and links to their online Girlsway content. Unlike other Girlsway sites, Sextape Lesbians doesn't offer any supplementary content, leaving members with just the main scenes and galleries to view. (Sure, bonus footage from "sextapes" might be hard to justify but realism isn't that important to this pornstar-starring site.)

And, obviously, duh, it goes without saying that nothing found at Sextape Lesbians is genuinely homemade and its performers are not genuine amateurs. These "sextapes" have been shot on sets and in carefully selected locations and can, at times, feel a bit more artificial than many viewers might like.

Conclusion:
Sextape Lesbians holds just 23 scenes, updates every Monday, and is tightly connected to the small but very promising Girlsway network of all-female hardcore sites. Small as it is, I doubt there'll be a huge rush of new members flooding the front doors of Sextape Lesbians, but with Girls Way presenting a pretty tidy package, it just might get the attention its impressive "homemade" scenes deserve. Handheld and stationary cameras provide varying angles on the tongue-lashings and finger-bangings seen here in 1080p HD video and 1920px photo frames, each loaded with detail. Updates arrive weekly and should keep Sextape Lesbians growing steadily alongside its network sister-sites. it is small, though, so don't expect an onslaught of hundreds of sextape-styled all-girl hardcore romps: Sextape Lesbians is modest but extremely sexy stuff.