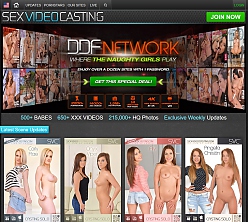 Many casting sites interview their naked models then show them the door, but not Sex Video Casting. Well, not all the time anyway. Casting scenes deliver striptease and posing, explicit close-ups of certain body parts, focuses on long legged and busty babes, and even hardcore fucking sessions shot largely in POV style and given an authentic feel.

Sex Video Casting has seen many women, both one-timers and future stars, step in front of its HD cameras and the site now holds over 800 scenes, each one exclusive to this DDF site. Discounted to a very affordable $9.95 by Mr. Pink's, your first month inside Sex Video Casting is more affordable and irresistible than ever.

Cons:
Denys Defrancesco is well known for his lush visual style, but it doesn't suit all viewers and hasn't been left out of Sex Video Casting scenes. Lighting and makeup tends to paint the models' skin tones in rubbery, pastel hues that stand starkly against the often all-white studio backdrop. This style does at least give you a chance to see how each auditioning babe will look in a regular DDF episode.

With no new scenes landing here in about 18 months, it's unclear whether Sex Video Casting will be revived in the future or simply sit as-is until everyone loses interest. The 809 scenes online here offer a good collection of casting videos but the lack of new content makes it hard to seriously devote yourself to this one site.

Conclusion:
No longer adding new content, Sex Video Casting is now relegated to being labeled an 'Archive' site on the DDF Network. While that does indeed suck, it's not a total disaster as what was left standing is a strong collection of High Definition "casting" encounters between wannabe pornstars and guys in the business to some degree or another. The majority of performers can probably be recognized as bona fide pornstars but there's a good chance their Sex Video Casting scenes were one of their firsts, if not their actual debuts. Videos usually offer an introductory portion before getting down to the talent test, rendered here in 1080p streams and downloads that bring crisp images to the screen. Photo galleries offer a slightly different visual style and can feel overly doctored, likely digitally "airbrushed" at times, but that's par for the course with Denys Defrancesco. The nine-site DDF Network is not included in Sex Video Casting membership packages, though it can be purchased on its own. With no updates forthcoming but plenty of slightly, beautifully awkward and consistently sexy hardcore episodes already online, Sex Video Casting is one of DDF's weaker sites, but it still has quite a lot to offer.