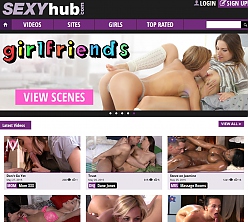 Streaming and downloading in High Definition resolutions, Sexy Hub's exclusive smut looks about as good as you can expect. Videos play clearly online or download from reliable servers in MP4s at 360p, 480p, 720p, and 1080p resolutions while photo galleries offer an even more erotically sophisticated take on proceedings with 4000px images.

Something new (and no doubt sexy-as-fuck) arrives at Sexy Hub every day of the week, weekends included. There's already a strong archive here, some 1557 scenes in total, each with an accompanying photo gallery. What's more, Mr. Pink's has scored a discount deal for our readers: $17.95/Month.