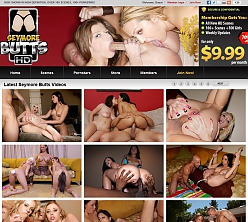 Seymore Butts might be a legendary name in adult circles, but you may not have actually seen the man's work. Now's your chance! Seymore Butts is now online at a website of the same name where members enjoy nearly 200 of the best of Butts, allegedly in 720p HD quality, too! Could this be a beautifully remastered archive of the works of one of porn's most influential producers? For some reason - perhaps it's the dirt cheap price - I remain unconvinced, but why don't we find out for sure?

One of the best things about this site is the price: a mere $9.95 gets you inside for a full month. That's so cheap there was no need for a Mr. Pink's discount. Butts has to eat, you know!

Cons:
Videos may download in 1280x720 pixel containers, but they're certainly not actually High Definition. The vast majority, if not all of the available content was shot before HD cameras became commercially available and have likely been upconverted to their new pseudo-HD format.

For a man with such an extensive oeuvre, Butts hasn't even begun to fill his site with sufficient content. A new scene arrives every eight days, and with only 179 scenes currently online, there really isn't a great deal here. Although there's many hidden gems, scenes can be hit or miss both in regard to their potential for arousal and their technical merits.

The site is clearly a haven for bugs and bots. Take a look at most any scene's comment section and you'll find such gibberish as "ODM2WUo4S1Nu" and '"()&%1prompt(900693)" along with a few spammy urls and nothing at all of substance.

Seymore Butts, this site has clearly been assembled from a pretty basic template and is rife with errors and missteps. Search results aren't specific enough for efficient browsing; the model index shows only a dozen women when far, far more are featured elsewhere on the site.