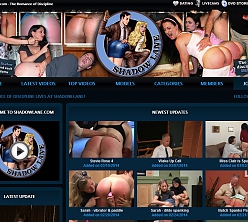 Overview:
The world of human sexuality can be a bright, bubbly affair in which everyone gleefully gets off with their desired mate or mates or their solo selves and goes home for a sound night's sleep. There's a darker side to sexuality, too, and that's the kind of arena Shadow Lane plays in. Well, perhaps "arena" is the wrong word; more like a "dungeon" really. Shadow Lane is a hardcore BDSM and fetish website that opens with an image of a business-attired redhead about to have her backside spanked by a rather serious looking fellow, so it's clear BDSM and kink activity is on the cards here! "The romance of discipline lives at Shadow Lane," the introductory page reads before opening up to a whole barrage of bruised, red female asses, firm-handed men ready to administer punishment as well as plenty of plugged pussies and asses, roleplaying scenarios (is that a priest I see?), and many other fetishistic uses of their personal time. Gaining access to Shadow Lane won't involve knowing the right people or the secret passcode. Just pay $29.99 for a month-long pass and you're good to go. Be careful, though. Shadow Lane is not for the easily disturbed.

Pros:
If you're turned on by submissive women being punished for their incredibly salacious misdeeds, Shadow Lane has you covered with plenty of male-dominated spanking, flogging, fucking, paddling, tickling, caning and bondage scenes that see the women left with raw, reddened skin, misty eyes, and the occasional trembling lip. Their bodies take a lot of punishment and look fucking hot doing it!

Before anyone starts tossing around accusations of misogyny, please note that men are put under the control of female dommes throughout Shadow Lane's archives. These sissified wimps are beaten, teased, tortured, cuckolded, brutally ass-fucked by busty strap-on sporting psychos, and generally made to feel pretty damn worthless. Sound hot to you? Have at it, boy!

Photo quality is reasonably high throughout the more recent Shadow Lane galleries and sees images reach 3456px in online galleries and zipped downloads. The archive isn't anything to sneeze at either, with 291 video and photo updates already available and more arriving every four or five days, Shadow Lane is well stocked.

Cons:
Or so it would appear. Shadow Lane's content count has been inflated due to the practice of adding scenes in multiple parts across multiple upload dates. This leaves you to reassemble longer scenes yourself and sometimes even to track down that elusive third chapter which isn't where it should be.

Shadow Lane certainly doesn't appear to be a recent production. Instead, the quality of the imagery, the fashion and hair styles in play, and the 4:3 framing of what would now almost certainly be widescreen videos tell us this smut is at least four or five years old.

If you want sterling video quality to go along with those tasty high-res photos, bad luck. Shadow Lane's scenes are offered in only two formats, WMV and MP4, and each one offers only one resolution (and you'll have to download it to find out its digits). Video sizes vary throughout the archive according to upload date, but most scenes peak at a dismal 720x540 pixels and are in dire need of an HD upgrade.

A download limit caps your hoarding of Shadow Lane's kinky smut at 2 GB per 12-hour period. Man, it's a good thing there's no HD content here, 'cause if there was you'd be stuck downloading single scenes every day for a month just to get some worthwhile downloads out of your membership.