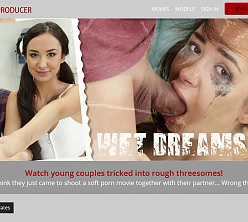 Some female faces may seem familiar but there’s also some super foxy amateurs gracing the casting couch at Shady Producer. Slim, fit blondes and tattooed bad girls, elegant brunette wives and nerdy office worker girlfriends all get the chance to go (and blow) pro here. Most relish the opportunity to transition from secret inner slut to outright whore.

Shady Producer usually updates on a weekly basis though from time to time it will skip a week or update a little late. This is not a large site, not yet anyway, and the more frequent the updates filling in out arrive, the better. It’d be great to see tight, consistent updates continued into the coming months.

Conclusion:
Shady Producer brings to life a perverted scenario that’s surely familiar to many professional entertainers and performers of all different strips. Ok, sure, they may not have cucked their fiance for a bit part but there are definitely similarities. Here it’s all fun and games, though, as “amateur couples” (read: Euro porn performers) aim to make a little extra cash shooting an intimate sex tape together. Once the producer or his stuntcock join in, though, things get pretty damn crazy around here. If you’re sensitive to cheating, infidelity, or whoring scenarios this site may be too much for your delicate sensibilities. If you’re a devoted fan of carnal corruption and girls fucking for money, Shady Producer has a unique take. The archive only holds 26 scenes at writing and there’s definitely some growth needed but Shady Producer definitely looks capable of keeping things moving upwards and onwards.