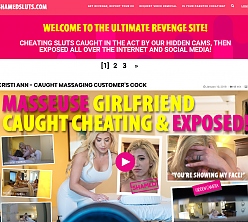 Being cheated on hurts and wanting revenge is only natural. But trust me, fellas, going down the road detailed by the Shamed Sluts organization is not a good idea; you’ll only end up more bitter. Shooting surveillance of suspected cheating girlfriends on the request of their men, Shamed Sluts then sets about testing the young woman and (obviously) find that she’s down for pretty much anything, sexually, with anyone. In brilliant HD and Ultra-HD videos that detail every humiliating second of her hardcore affair, Shamed Sluts is a bold new take on infidelity fantasies.

Pros:
Creating original fantasy scenarios detailing the ins and outs the wanton infidelity of a certain woman, Shamed Sluts surveils and records her stepping out and the resulting fiery fuckfest. Visually powerful and with a strong narrative bent, Shamed Sluts presents its hardcore hookups as revealing documents of humiliated men and the women that don’t deserve them.

Playing these lusty, busty bicycles, Shamed Sluts features Cristi Ann as a handsy masseuse, Ashely Adams as a orally inclined gym rat, cheerleader Maya Bijou taking a two-dick pounding while another guy holds the camera, and Holly Hendrix legit calling her mom while Brick Danger slams her cunt from behind, every moment captured on hidden HD cameras, smart phones, and security cams, and used to shame the titular slut.

Visually, Shamed Sluts is a huge leap beyond what most studios are content to peddle these days. Not only shot with strong color and tonal depth, and somewhat narrow focus that keeps the action front and center at all times, Shamed Sluts is also ready for viewing in 1080p HD and 2160p Ultra-HD streams and downloads that look a real treat.

Shamed Sluts pushes its concept quite hard and may be too humiliating and degrading for some viewers. Some of the male performers do a great job of acting the part of the forceful pussy-hound, conniving gym partner or pushy study buddy but some guys have such a potent gleam in their eyes when slapping and spitting on their co-stars that it’s hard to call it a performance.

I’ve always wondered if scenes such as these with two main settings and quite a lot of story to wade through would be better served by chaptered updates. The first installment could bring the setup, story, and surveillance to the fore and show a taste of what’s to come once pants are removed and fluids begin flowing in both directions. This would limit the time ‘wasted’ on lengthy intros by folks just out for the sex.

Conclusion:
When Shamed Sluts first appeared on my radar, I must say I was pretty psyched. Cristi Ann, Ashley Adams, Holly Hendrix, and Maya Bijou in risqué reality-based hardcore encounters dwelling firmly in infidelity fantasies and produced by the expert art-porn creators at Fetish Network in 4K Ultra-HD video formats?! I mean, what’s not to love? Well, the small size of Shamed Sluts’s archive, for one. Only nine scenes are to be found here and, though they’re each one an excellent and intense hardcore creation, that’s really not enough to keep the hefty porno appetites of today’s audiences satisfied for long. Videos play perfectly whether streamed or downloaded, the rich imagery packing incredible heat and showing off the sweaty, lusty bodies very nicely. Like many other high-concept Fetish Network sites, however, Shamed Sluts hasn’t seen much action these past few months.