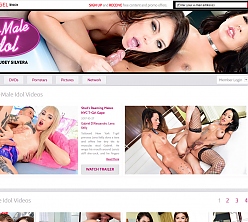 Although you won’t find them traipsing across a stage or prancing down a catwalk, the sneakily stunning trans-women of Shemale Idol are much like your everyday superstar beauty queens, just with dicks. Under the careful, carnal direction of Joey Silvera and hosted by the indomitable Evil Angel network, Shemale Idol offers hundreds of HD hardcore encounters between men, women, and the sexiest roster of trans-stars you could care to find. Make no mistake, as transsexuality becomes more accepted and more popular, Shemale Idol’s fame will only grow with it.

Overview:
Almost like a hardcore behind-the-scenes version of Ru Paul’s Drag Race but with trans-women, not drag queens, Shemale Idol is Evil Angel’s typically intense take on trans-fucking of all kinds. From legendary director Joey Silvera, the HD-equipped Shemale Idol archive holds plenty of all-out carnal thrills of a truly gender-bending variety. Home to both all-trans scenes and super-hot cis-trans pairings and groups, there’s almost nowhere Shemale Idol can’t find to thrust a cock and almost nobody that couldn’t find a way to insert themselves (mentally, in the audience’s case) into any given Shemale Idol scene. Point to an orifice or extremity and Silvera and crew can find an inspired way to tend to it. This here cast of stunningly feminine trans-stars doesn’t exactly take a backseat to the big-name director, though, with the likes of Venus Lux, Eva Lin, Aubrey Kate, Bailey Jay, and Sarina Valentina lending their impressive physiques to some seriously experimental scenes. Known to shove all kinds of kitchen utensils and plastic toys inside his subjects’ assholes, Silvera doesn’t shy away from shooting duos, trios, and groups in salacious ass-expanding, cock-sharing, double-penetrating encounters. Taken on the sex acts alone, Shemale Idol isn’t Silvera’s wildest work, but his kinky, colorful style is applied to every single one of its new HD titles. At $29.95-a-month, Shemale Idol is an affordable and exciting trans-hardcore effort from a stalwart of the trans-porn scene.

Pros:
In his long-running Trans-Visions, TS Factor, Trans- X-Perience, Rogue Adventures, and How to Please a Shemale DVD series, as well as the She-Male Idol series itself (and all its variants), Joey Silvera shoots glam-tinged hardcore sex that takes great advantage of its cast’s unique physiologies. Largely populated with trans-women - formerly known as “chicks with dicks” - each title offers another dose of Silvera’s solid trans-debauchery.

Hitting the homepage every Wednesday with another richly vivid dose of trans-sodomy (or something damn close to it), Silvera and crew deliver High Definition video streams and downloads (720p and 1080p) and photo galleries online and zipped (both at 1920px). All the more recent updates offer crisp detail and strong color - perfect for this niche and fucking style.

Cons:
Once you set virtual foot inside Shemale Idol, you lose almost every unique design element and stylistic trait that you found so appealing (perhaps subconsciously) on the tour pages. The scenes themselves carry this style along but inside the members area it’s all Evil Angel-this and Evil Angel-that, the familiar red-and-black palette rendering Shemale Idol’s work just a bit bland.

Silvera is a champion of trans-porn and has been for some time, and for that he should be applauded! That said, some of the earlier Shemale Idol work is pretty drab and lifeless or, heading the other way, filled with zany sexual antics but lacking any clear visual style or craft.

The last five years have been great for trans fans thanks largely to Silvera, but the man’s fans are hardly as blessed as those of his fellow Evil Angel directors Jonni Darkko, Francesca Le and Mark Wood, John Stagliano, or Lex Steele, all of whom provide ample behind-the-scenes and bonus footage to members. In that department, Silvera provides nothing.

Conclusion:
Shemale Idol’s 700-plus scenes may not diverge very far from Silvera’s established M.O., but they do offer smut more colorful and fun than most in the trans-realm. Updates land here on a weekly basis, adding more wealth to an already well-stocked site. Members will likely develop favorite DVD series and enjoy going back to them time and time again, new editions seemingly always arriving, to see new trans babes fuck in their favorite style. Easily one of the less immediately noticeable of Evil Angel’s sites but definitely one of the most precious, Shemale Idol’s inclusion of cis-and-trans pairs of women makes it especially likely to see crossover success. After all, who among Katrina Jade’s teeming legion of fans will be stupid enough to pass up the sight of her taking the dick of tattooed ice-queen Nina Lawless? Shemale Idol could stand to add some extras, behind-the-scenes clips and the like, to allow members more insight into its very interesting cast, but that aside, it’s a dynamite take on trans-hardcore with arguably porn’s most valuable bonus: free Evil Angel network access.