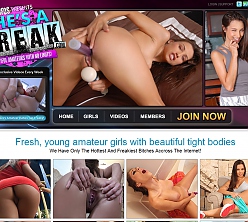 Now available in both 720p and 1080p resolutions, She's a Freak's videos offer amazingly detailed shots of these self-pleasuring minxes in streaming only. A good selection of video format options cater to most users. Photo galleries accompany the scenes and can be viewed online or saved in zipped sets.

Although it has been a little quiet here of late, She's a Freak's content archive holds 384 scenes and their accompanying galleries, which should prove enough for most viewers. Those still requiring more titillation will find it, however, on the other 14 Mofos websites, all of which are accessing to She's a Freak members. And, thanks to Mr. Pink's, you can now join She's a Freak (and, by extension, all of Mofos) for only $19.95 monthly!

Cons:
It appears She's a Freak has fallen from the list of Mofos' top priorities, having last updated back in April of this year, over three months ago. With nothing new arriving since then, it'd be easy to assume this site is on its last legs and could soon be relegated to the nostalgia file.

Descriptions of the action taking place in each scene can only be viewed if you manually select to view them via the main scene index. Once you've selected a scene, though, you won't find a synopsis on the actual viewing page, nor will you see any model names, keyword tags, or links to associated content.