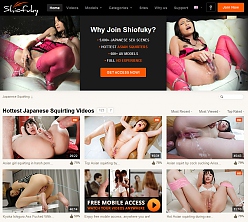 The gushing girls of Shiofuky include quite a few noteworthy Japanese Adult Video Idols like Iori Mizuki, Hinata Tachibana, Maki Hojo, Tomoka Sakurai, and the doll faced Arisa Nakano. Most of the time, the models look stunning in the well-lit scenes regardless of where they were shot. From thicker MILFs to super-slim teens that unleash more fluid than you'd expect them to hold, there's good variety here.

Cons:
Shiofuky hasn't seen much action of late. In fact, in the past twelve months less than twenty new scenes have arrived here. Without access to the JAV HD network, Shiofuky membership would only be worthwhile if you're absolutely devoted to female ejaculations and Japanese women. This isn't the only network site with update issues, either.

Video downloads don't always match the noted resolution or format. After downloading a more modestly sized video than the 1080p MP4 you may open the file to find exactly what you'd hoped to avoid: a 1080p MP4. Other times no 1080p will be available despite claims to the contrary, a 720p sitting in its place.