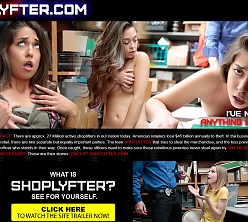 Pros:
Each Shoplyfter episode begins like any other day in the loss prevention office of a retail establishment somewhere in the USA. A young ruffian has been caught lifting merchandise, even cash, and now sits before the apprehending officer trying to weasel her way out of a stint in county. The first half of each scene is filled with dialog and discussion between the characters before a deal is struck and the girl, usually reluctantly, gets to work fulfilling her end.

A growing roster of today's most promising young starlets have stopped by Shoplyfter to show both their sexual and dramatic talents. Blair Williams, Alex Harper, Alyssa Cole, Krystal Orchid, Kat Arina, and Audrey Royal (who takes on two officers) all acquit themselves with skill and style. It'll be interesting to see who Shoplyfter apprehends next.

Updating every Wednesday with another back illicit (and explicit) room bargain, the admittedly small Shoplyfter archive is growing steadily. Update packages provide a downloadable photo gallery (900px), 1080p, 540p, and 360p video downloads, and a 540p HD video stream. An introductory discount will get you inside Shoplyfter for a modest $14.87, so act fast!

Home to quite a small collection - only 25 scenes are online at present - Shoplyfter won't be large enough for some more demanding viewers. The lengthy scenes create an excellent voyeuristic viewing experience but much of each scenes is sex-less, showing instead the process of capture, coercion, and bargaining that eventually results in sexual activity.

Sure, it's a fantasy scenario in which everyone is a willing participant, but Shoplyfter's scenarios straddle ethical lines that some viewers may find old-fashioned, unwanted, and objective. Some girls play the part of the reluctant, desperate cocksucker a little too well, their objections often coming off quite close to an outright "No!"

Conclusion:
Shoplyfter hasn't been on its crime-busting, thief-fucking adventure for very long and only has 25 scenes to show for all its surveillance and security. Thankfully, anyone into coercive sex scenarios, girls being "taught a lesson," and male dominance in general will find Shoplyfter a unique thrill. (Anyone who finds reluctant girls a problem, however, will not be pleased.) High Definition videos sourced from pseudo CCTV cameras and in-store or in-office security footage make for fairly convincing realism, as does the length intro sequences that establish the crime, the potential punishment, and the sexual bargain being agreed upon. As Shoplyfter grows it would be great to find higher resolution photo galleries and 720p or 1080p HD video streams, but the current viewing formats will be adequate for most viewers. Definitely something adventurous and unique, even within the reality-porn niche, Shoplyfter is showing huge promise.