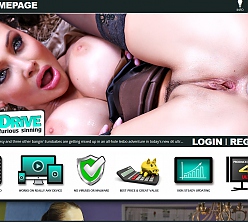 Overview:
"Fancy and furious sinning," warns the entry sign to Sin Drive, a hardcore Europorn site with a heavy emphasis on High Definition content. Sin Drive's niche sexual interests are perfect for viewing in 720p, 1080p, or even 4K Ultra-HD resolutions: wet-and-messy fetishism, waves of fake ejaculate, leather and latex and spandex garments, and fisting scenarios galore! What kind of sexually deviant hell-hole is this, you ask? A fucking entertaining one, I reply. Sin Drive's unique perversions see its studs dress as SS-esque soldiers for a brutal takedown of two buxom wenches, a foursome of female office workers jam their fists in each other's asses just because they can, and more small-screen urination and liquid play than you can shake a garden hose at. Costing €24.99-a-month to access (about $27.50 USD), Sin Drive promises its members multi-device compatibility, frequent steady updates, and, most exciting of all, 4K Ultra-HD videos that are likely to reach into your field of vision, grab hold of your attention, and never let it wander until the end credits start rolling. So, what do you say? Wanna some see Hungarian babes nearly drowned in syrup… in fucking 4K HD?

High Definition videos provide Sin Drive's members with clear views of every sordid 'n' sexy act shown here. Along with the standard 720p and 1080p formats, a 2160p Ultra-HD challenger appears and manages to make all other videos look sub-standard. The 4K video available here is a real treat and captures beautifully all the wet-clothed women as they writhe around in puddles.

Cons:
Sin Drive used to operate on a pay-per-view program and some remnants of the old arrangement are still showing. Before playing a movie you're asked to unlock it by making a purchase, even though this cost is now integrated into your membership fee. In short: it sometimes looks like you'll be paying per scene but that's no longer the case.

Essentially operating as one large site, Sin Drive is, in fact, a network of adult websites all recently rebranded under the Sin Drive name. Some of these sites wouldn't survive on their own but make a welcome contribution to Sin Drive. The larger sites would work very well at an arm's length from Sin Drive (network-connected but individually accessible). Sin Drive needs to make a decision: is it a network or a single site?

Videos might be available in amazingly detailed 4K resolutions, but there's a problem that really impacts your viewing of many, many scenes: interlacing. The horizontal line distortion seen in many Sin Drive scenes cannot be removed or adjusted without a studio remaster from an earlier, cleaner copy than what's in use here. No remastering program appears to be in place.