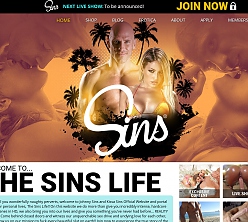 Having an intimate glimpse into Sins Life would be great in crummy little 240p videos, but in gorgeous 1080p High Definition streams (as well as 720p, 480p etc) that play smoothly and offer ample up-close GoPro action. When photo galleries are available, they also look very nice, hitting 1600px in zipped sets.

First known as Johnny & Kissa, now operating as Sins Life, this hot-and-horny married coupled and their exclusive members-only hardcore site have plenty to offer anyone into authentically passionate (but still adventurous) sex. There's over 100 scenes here and more arriving three times each week, making the Mr. Pink's-discounted $19.88-1st-month deal an even better one.

Johnny Sins has been around for quite a while, fucking for every major adult studio and many minor ones. Some of his better, earlier scenes can be found here at Sins Life rendered in 720p HD streams. Fans of Ashlii Orion, Deena Daniels, Alexis Texas, and the hugely underrated Ava Rose will be thrilled but Kissa's fans probably won't be.

Conclusion:
Sins Life may not be overflowing with exclusive porn just yet, but I'll be damned if this isn't one of the most promising adult sites to spring up in years! The three weekly updates bring both videos and stills to the archive in episodes ranging from discreet beach sex (with passers-by and everything), vacation bungalow romps interrupted by a housekeeper, fiery three-way sex with Veronica Rodriguez and others, and even some solo self-pleasuring from both Kissa and Johnny. Photos aren't all that impressive here at Sins Life, though it's easy to see why. Shooting videos of themselves in various low-key, off-set environments, the Sins have a tough job in a way, though they pull it off marvelously. High Definition video streams bring subscribers tantalizing visions of naturalistic (if heightened) couples' sex. Really, the only major element missing from Sins Life is downloadable video content. (But, hey, I can understand Johnny not wanting random guys to take Kissa home with them, can't you?)