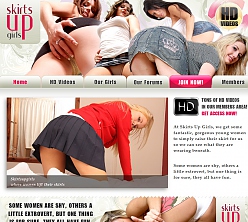 I've only had a few instances in my life when I've 'accidentally' snuck a peek at the underwear of a real live woman in real life. She, a friend, got out of my car and was wearing Marvel Comics boyshorts and I fell in love (aww). I think she did it on purpose, unlike the women of Skirts Up Girls, who must be coaxed and cajoled and convinced and coerced into lifting their skirts or dresses and showing what secrets lie beneath. You, too, can discover the joys of peeking at panties by signing up for a Skirts Up Girls membership. Will it be hot enough to get your blood pumping or is that rage brewing over wasting money on a site no more worthwhile that an escalator ride at the mall? Read on, fella, and find out!

Overview:
When attempting to catch a glimpse at the parts of a woman usually concealed beneath items of clothing, the easiest option involves cleavage; but as the presentation of cleavage is a willful act on the part of the bearer, it isn't usually as thrilling as a stolen glance at the lower nether-regions. Hence, dear reader, the existence of "upskirt" pornography. Let us now examine a prime example of upskirt porn in the hopes that we might broaden our minds and expand our sexual horizons into heretofore unchartered areas. Said example? Skirts Up Girls. On the tour pages visitors will find proudly emblazoned in numerous places that shiny two-letter logo that makes masturbation-obsessed fellas "meep" with joy: HD. "Tons of HD videos in our members area!" the site claims. "At Skirts Up Girls, we get some fantastic, gorgeous young women to simply raise their skirt for us so we can see what they are wearing beneath." Well, shit, with such a crystal clear synopsis of what Skirts Up Girls is all about, why should I even bother running down the rest of this intro? Let's get some facts outta the way then get your asses inside, huh? Price: $14.95 for the 1st month. The site: Skirts Up Girls. The reviewer: Mr. Pink. The time: now!

Whether dressed in police or military uniforms, office clothes, evening gowns, or what have you, all performers are eventually convinced (usually by the cameraman) to offer us home viewers a flash of their underwear, perhaps even a longer, lingering look. Tasty!

Videos look pretty damn good at 960x540 pixels in WMV format. While not exactly the High Definition movies promised on the tour pages, these 540p videos nonetheless look pretty damn swanky and shouldn't have anyone screaming bloody murder and betrayal.

There are already 200 scenes hosted here at Skirts Up Girls, yet the crew behind the site are still managing to add another fresh panty-revealing scene twice a week. That's right, upskirt fans, Skirts Up Girls, a reasonably obscure niche site, is growing faster than most mainstream pornsites.

Cons:
Hey, videos are cool and all, but what about still images? They've been around longer, can now be snapped, edited, and uploaded in mere minutes, and they constituted the first instances of pornography. Why then have photos been left off Skirts Up Girls entirely? I don't know but it's pretty disappointing.

A daily download limit is in place and affects all members. Keep your downloading below 1.5 GB in a 24 hour period and you shouldn't have any problems. Exceed that and you could find yourself without access to your new favorite upskirt site; for a day or two, anyway.

Members are not given many helpful tools to guide them around Skirts Up Girls. Instead, they're left with little more than a model index and the basic update listing. Need a decent search function? Bummer, dude, 'cause the one here is pretty damn weak.

The videos hosted by Skirts Up Girls are pretty short, generally running no longer than three or four minutes (maybe five if you're lucky), which can get on your nerves after viewing only a few scenes, especially if you finally found someone you, you know, have strong feelings for.

Conclusion:
The folks behind Skirts Up Girls have placed their site in a rather odd position. Its short scenes, lack of HD video, abandonment of still photos, time-consuming navigation system, and a pretty damn small daily download limit mean that those who really, really dig Skirts Up Girls are going to be the most frustrated by its handful of notable shortcomings. Casual users who just need a dozen or so upskirt teasing videos to last them through a trying month - you know the type: favorite pornstar got horrible implants, favorite director's newest opus is a pseudo-art-house wankfest, your standby niche just doesn't do it for you anymore... - will likely find Skirts Up Girls to be a fairly enjoyable place to be and, having payed around 15 smackeroos (whether Euros or US Dollars) for access, the disappointing elements of this site shouldn't get them down. Without a few improvements, Skirts Up Girls will remain a 'maybe, depends on how desperate I am' kind of site for this reviewer and anyone who directly seeks his advice. To the foolhardy or, I suppose, just plain desperate, however, Skirts Up Girls could be a revelation!