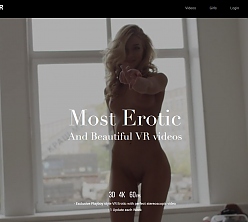 Overview:
The perks of power! Money, access, women, luxury, court- or ring-side seats at whatever ball game or title fight you choose... The list of things accessible to the super-rich seems endless, each one a fantasy many of us hold but never realize. If you, like certain sitting heads of state, have a thing for statuesque Russian ice-queens but, unlike certain sitting heads of state, never quite made enough moolah to fuck your way through a few dozen of Saint Petersburg’s prettiest ladies, StasyQ VR is here to offer a virtual solution. A unique site built entirely to immerse its viewers in 3D scenes that, though totally free of sex, provide a steamy seductive enticement that’s very hard to resist. StasyQ’s intimate stripteases showcase Russia’s most enticing babes in 3D, 4K, 60 FPS videos aiming for a “Playboy-style” take on adult VR content. Updating weekly with another woman eager to show off her formidable form for your arousal and entertainment, StasyQ VR is a unique offering that seems to dig quite deep while keeping a firm grasp of both its personality and its purpose. At $14.99-a-month, StasyQ VR could be a great way to convince yourself that, yeah, maybe a Russian goddess could conceivably be into you!

Pros:
Although they’ve all been given rather curious names all ending in a capital Q - so they’re like the naked Russian female Ramones? - the women of StasyQ nevertheless look incredible rendered in 3D. Some, of course, come through the process better than others, their curves thrusting toward the camera before they recline and encourage your imagination to dive between those juicy thighs for more.

Video quality here is quite high, reaching 6400p at its very best. Suited to viewing on Oculus, Vive, Gear VR, Daydream, PS VR, and smartphone devices, encoded as h.265 MP4s, at either 30 or 60 FPS, videos look smooth and clear. A new installment of the StasyQ VR striptease series arrives every Thursday, adding to the 50 scenes currently here.

Cons:
Unless you’re mad keen on implant-sporting Eastern European women who show little emotion or enthusiasm for their work, simply gyrating and cavorting for five minutes before throwing some jeans on and going outside for a smoke. This isn’t particular emotional or intimate stuff, folks, and can soon lose its saucy appeal.

The models can be clearly seen taking direction, adjusting their poses after glancing off camera and nodding to the director. You don’t hear the verbal directions, which is a relief, but when you notice the back and forth taking place, it pulls you out of the scene quite severely, ruining any immersive experience that was building.

All models have names ending in a capital Q. Why? Aside from effectively branding them to this site, this only obscures their actual names and makes them harder to identify off-site. FaraQ, MilaQ, and ElinaQ are all gorgeous, athletic women eager to show off their fantastic bodies, but I still don’t know their actual names (professional or otherwise).

The stripping taking place here seems much closer to the kind of awkward nonsense your ex tried after completing her pole-based “movement” certification. Maybe the art of the striptease is totally dead at this point or maybe it’s just StasyQ VR’s forced version of the act, but this site does lack genuine heat.

Conclusion:
StasyQ VR appears to have come out of nowhere to impress upon VR viewers the idea that a woman undressing can be just as deeply arousing and exciting as watching two fit folks fuck. Unfortunately, the lackluster treatment of the models pushes them into artificiality and can leave viewers feeling like they’ve intruded on a nude photoshoot instead of being seduced by a devoted (potential) lover. When scenes don’t show any interactions with the director, limit the models’ eyelines to the camera lens and her own body, and keep the connection between model and audience alive, StasyQ VR delivers some solid virtual stripteases that allow you to indulge in self-pleasure however you wish, not like your average strip club. Without access to the regular 2D StasyQ site, members of StasyQ VR are limited to just 50 stripteases and may find their resources here quite limited. StasyQ VR could prove very attractive in the future, but now it’s simply too small and too specific to have much general appeal to VR porn aficionados.