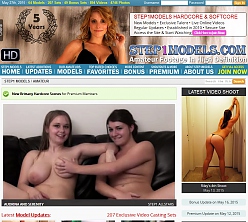 With more than 200 galleries and videos on the site, Step1Models isn't exactly lacking content. Updates are promised to arrive regularly with at least 30 mins of HD video - sweet! Premium Members can access bonus content, too: shout-outs from models to members, bonus hardcore and tease videos, and candid behind-the-scenes photo galleries.

Cons:
Video updates are usually only partial scenes or clips taken from a much longer movie. Splitting one encounter into four or five parts, the webmasters have made streamlined viewing quite the annoyance. If your servers can't handle the large files, Step1Models, I'd say some new servers are in order.

Paying the extra five-bucks-per-month for Premium Membership just doesn't seem all that worthwhile at Step1Models. Premium Members have access to exclusive videos and galleries but these are almost always supplements to the regular content (candid pre-shoot photos, showering etc) and, for most viewers, won't be worth the extra money.

Sure, Step1Models is an avowedly amateur site and, as a result the imagery tends to be a bit bland and color-drained even in High Definition formats. Preview thumbnails are censored even inside the members' area, which is really quite odd and needlessly obstructive.

Conclusion:
Step1Models might the first port of porn for many wannabe AVN-winners, but that doesn't mean it should be as shakily built as it is. Updates have slowed down and leave regular members wanting something new far too often. Premium members are granted access to a collection of bonus videos (softcore and hardcore and non-sexual), candid or sexy photo galleries, and even video shout-outs from models, but these bonuses aren't going to be worth the upgrade for most folks. In fact, unless you're mad for amateurs that can't be found elsewhere, Step1Models isn't likely to command your attention to the degree it probably wishes it would. Still, if you take a look at the tour pages and find the models appealing, you're not going to find them anywhere but here so you might as well indulge. After all - and this is a sentiment to which the girls of Step1Models can attest - what's life without a little risk?