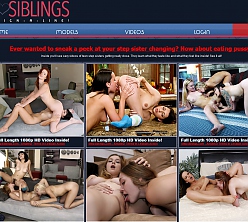 I've always been envious of the closeness between sisters. As a brother-less man, it can be hard to see same-sex siblings intimately bonding, supporting each other, and offering an unconditional love that nothing else can replace. Well, that and it's easy to let your imagination run wild when they do, creating raunchy mental scenes in which step-sister fucks step-sister and neither gives a shit about the consequences. Step Siblings is a Team Skeet site created by such an imagination, a site showcasing the horny HD exploits of sisters, BFFs, and cousins who can't keep their delicate female fingers off each other.

Overview:
Divorce has gone from being widely regarded as a last resort, mortal sin, social stain, and immoral act to being the end result of the majority of new marriages and the only way many once-wedded folks can experience the bliss of post-marital sex - with someone else! The rising divorce rate has also resulted in more step-families than ever before, blended units comprised of divorced and remarried parents and their family now thrust together and expected to coexist as brothers or, in the case of Team Skeet's newest blast of pseudo-incest fetishism, Step Siblings, sisters. Step Siblings is one of Team Skeet's riskiest and most risqué ventures, filled as it is with scenes depicting teen and young adult step-sisters ignoring their parents pleas for a platonic partnership and instead diving between each others' thighs for a pussy-licking, clit-sucking, ass-rimming good time! Charging $28.97 for monthly access but promising to give all members a direct connection to every other Team Skeet website, too, Step Siblings aims to be a lesbian hardcore site with a difference. Starring the lusty, youthful likes of Nikki Hearts, Raven Rockette, Abigail Mac, and many more carnally compelling bisexual and lesbian performers, Step Siblings may not only make you wish you could transform into a girl and experience this kind of hyper-sensual sex, it'll also have you wishing for a step-sister.

Pros:
From trying on bikinis to games of doctors and nurses, from therapeutic yoga sessions to cookie baking turned kitchen-floor fucking, each Step Siblings scenarios takes place in a realistic world created by Team Skeet's crew, a world in which step-sisters flirt openly with each other, discuss sex very frankly, and don't seem too dissuaded by society's anti-incest (even step-incest) attitude.

Although Step Siblings is quite a small site and doesn't offer a substantial serving to its members. Thankfully, Team Skeet network access is included in all membership packages, giving members another 26 Team Skeet sites to enjoy, sites serving up another 2000 very lively hardcore scenes. Mr. Pink's discount offer can also now save you some money, giving you access to Step Siblings and Team Skeet for only $14.87.

I'm honestly not quite sure what the origin of this content is, but it's definitely not the freshest smut on Team Skeet's servers. Comments from members suggest that Step Siblings has been re-adding scenes after upgrading them to 1080p resolutions. Video quality (a tad dark and pixilated during heavy motion) supports this idea, as does the presence of performers not seen for well over a year.

The "step-sisters" of Step Siblings often aren't sisters, step or otherwise, and sometimes aren't even related. And not just in real life, but in the context of the scene, too! Numerous scenes see friends, BFFs, besties, and girlfriends (the usually platonic kind) get it on in marvelously sapphic style - but they're not step-siblings, not all of them.