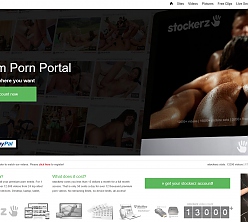 Shot in High Definition formats and ready for streaming viewing at 540p, 720p, and 1080p resolutions. While it's a real shame downloading is forbidden, these video streams do look very good overall, bringing Stockerz members a wide variety of smut that sticks to a pretty decent standard of image quality despite being from different sources.

Cons:
Some Stockerz content appears to be exclusive but it's most definitely in the minority. Most sites simply pull content from a larger, standalone version of themselves, essentially making Stockerz a sampling emporium of major and minor European studios. Some content has clearly been sitting in a vault for a few years, too, and looks a bit dated at this point.

None of the videos hosted by Stockerz can be downloaded for safe keeping and later local viewing. Left with no choice but to sit back and stream, many viewers will find Stockerz extremely disappointing and prefer to head to the standalone versions of their favorite Stockerz properties to more fully enjoy their preferred content.

One of Stockerz websites is a live webcam service that requires additional payments before you'll get any further than non-nude glimpses of the performers at rest. Thumbnail previews of and ads for these webcam shows, as well as archived or offline shows, are littered throughout Stockerz.

Conclusion:
Stockerz's name suggests a huge archive of hardcore porn and on that promise Stockerz truly delivers. Those seeking an original and exclusive viewing experience won't find it here, though. All Stockerz sites pull content from their larger standalone versions, making this network more of a sample pack. Without no downloads offered, members are stuck with streaming their selected movies. Image quality is quite high on most Stockerz sites, the vintage, retro, and archival sites dropping however into lower resolutions than the 1080p and 720p standard streams. There's plenty of activity here throughout the month with updates landing a few times each day with only occasional exceptions. Stockerz is huge, yes, but there's other Euro-heavy networks out there even larger and more fruitful. If you're eager to sample a wide range of Euro-centric smut and don't mind passing on downloads, Stockerz could suit you fine and fill your gap sessions with a strong variety of sexual entertainment.