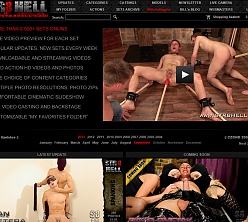 Calling your homo hardcore site Str8 Hell guarantees your audience will be made up mostly of sadists and masochists and those that wish they could commit to such a lifestyle but instead find pleasure in the virtual. On this highly original site from the folks behind Czech Guys Next Door, you'll find riveting scenes in which aggressive gay men wield their pink swords in the name of conversion, slashing at any hetero male passing by and sometimes even hunting them down. It's curious world out there. Yes, even for breeders.

Overview:
Since you're reading this, odds are good you're either a gay man who fancies converting "straight" guys or a "straight" guy with very little stopping you from participating in an all-male lovefest. Either way, Str8 Hell aims to prove that even the tightest asshole can loosen up and get down if they're led by the hand of an experienced lover. Well, almost. Str8 Hell's brand of homo hardcore is much more debauched and adventurous than simple couplings: whips, restraints, paddles, urination, and even some light torture can be seen on the tour pages, so just imagine what's inside! Membership runs $29.95 (recurring) or $34.95 (non-recurring) per month, but, before you pony up, join and start salivating, there's something you should know. Str8 Hell appears to be the site formerly known as Czech Guys Next Door and, as we all know, when a site up and changes its name and identity, it's either making positive strides out of mediocrity or headed rapidly downhill. Which will it be for Str8 Hell?

Pros:
Str8 Hell sees a fairly rare but very entertaining premise come to life. "Straight" guys find themselves, through luck or intention, in the company of aggressive gay men who'll do anything to turn this breeder and his puckering asshole into a fellow flyer of the rainbow flag. Whether they get busted walking through airport security, offend the wrong bar patron, fall under the spell of a hooded mystery man, or even submit to emasculating women, there's lot of converting fun here, complete with great and often rough sex.

The guys of Str8 Hell generally come in one of two forms: the gay aggressor and the straight submissives. There's also a handful of scenes with women being the ones to queer the straighties. The model roster doesn't just offer profiles, but links to all your chosen model's content in one tidy serving.

High Definition videos keep things looking brilliant even in dimly lit basement or dungeon scenes. Resolutions reach both 720p and 1080p - there's a catch with the latter, though; I'll get to that soon - and offer ample detail and strong audio. Photo content looks good and can be viewed online or offline thanks to downloadable zips.

With updates arriving once or twice a week and with 266 scenes providing both video and photo content, there's plenty of carnal conversions to enjoy here - and that's just the main portion of the site. An archive (held on another sever, another site) provides access to the old Czech Guys Next Door site, which holds content going back to 2004. Now that's a sweet bonus!

Cons:
The menu links for Sets Archive and Castings take you to the aforementioned Czech Guys Next Door archive site and require you to enter your log-in credentials once again. Once inside, you'll find a blandly designed site with minimal navigational bells and whistles.

Subtitles will annoy those who don't want to be forced to read while beating their meat. Thankfully others won't give a shit. It seems lazy, I know, but if you've ever tried to convince a nay-saying friend to watch a foreign movie only to be met with "Fucking subtitles? Dub that shit in English, my man!", you'll understand me all too well.

Access to Str8 Hell's 1080p video format must be paid for and, with scenes costing around ten bucks a pop, that can be end up a hefty expense. In a way, though, it's a relief the large 1080p video files are out of reach; if they weren't you'd likely hit the 7 GB daily download limit far too often.

You don't really believe these "straight" guys are actually, legitimately, entirely straight, do you?