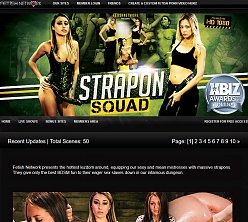 Submitting to their foxy female dommes, a bevy of sexy young starlets are trained in the art of physical, mental, and emotional submission, including Sheena Rose, Layal Price, Mena Li, Alessa Snow, and Jynx Hollywood. Their bodies restrained, tied to hobby-horses and racks, the subs are pried open and pounded by all kinds of implement, the king of course being the titular strapons and the righteous fucking they administer.

The posted video resolution information is, in almost all cases, just plain incorrect. The "4320p" video is really 1080p while the "1080p" provides users with a 540p video. This pattern goes all the way down to a 180p MP4 that nobody's going to want to bother with. Seeing genuine 4320p videos online would obviously be awesome.