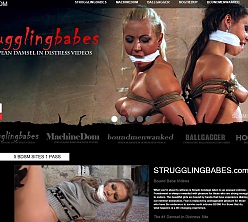 Photo galleries aren't made available in the most obvious and logical fashion, but when you do land on a still showcase of your favorite Submissed model you'll note the exceptional quality of the shots. In 4016px resolutions, in zipped sets and online slideshows, Submissed's photo content looks very good.

Cons:
Among the main Submissed archive lies around 20 scenes of "bonus" content provided by alternate sources and studios. Some of this content is very good and fits in well here but with bonus updates tossed in with everything else they can get in the way of Submissed's original work. Essentially advertising for the competition, the bonuses are an odd inclusion.

Two Submissed sites have struggled to keep frequent, regular updates coming. Sub Amateur and Hogtied Up miss their deadlines on more than a few occasions. Photo content is on a confounding schedule, too, with some sites adding more and more galleries of late and others ditching them almost completely.

Some of Submissed fetishistic footage seems a little dated. It's quite possible that the delay between production and online release through this network ran in excess of a year or two. Let's hope that's the explanation, not that Submissed is pulling content from old, dated, forgotten archives.

Access to six sites should being many members a wealth of wild sexual entertainment but those seeking non-BDSM content won't find anything here, not even among the bonus updates, to suit them. Access to the larger and much more varied Stockerz network is not included with Submissed memberships and must be bought separately.