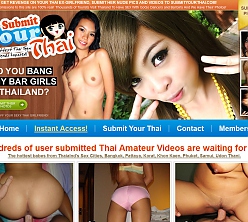 If you've never traveled to Thailand and visit the seedier sides of its cities, you're unlikely to have your amateur pornography featured on Submit Your Thai. But if you're even slightly interested in the small-framed, tight-pussied, sweet-looking minxes that dance and entertain guests in Phuket's Gogo bars, Submit Your Thai is bound to impress upon you a feverish desire to fuck your way through one of Southeast Asia's most naturally dazzling jewels.

Overview:
A friend of mine recently embarked on his first international vacation, heading to Thailand for fun, sun, and girls. On his second day, in the middle of a self-directed island tour on motorbike, however, he had a severe accident that left him hospitalized while his buddies went out raging at Gogo clubs in Phuket. My friend wasn't just pissed that he didn't get to enjoy the more salacious attractions Thailand offers, he was also pissed that his bros didn't snap a single photo of the girls they met, paid, and (presumably) nailed. Had they done so they could've sent the pics to Submit Your Thai, a site built around that very premise: foreign men sharing their Gogo Girl adventures through the wonders of digital photography and anonymous Internet porn. Submit Your Thai immortalizes dozens of adorable Thai girls, most of them the kind that are more than happy to accompany you to your hotel room for a fee. Offering guys the chance to field props from would-be bros or get revenge on former Thai flames in a most scandalous fashion, this is a site so wrong, yet so right at the same time. Getting inside this treasure trove of amateur Thai hardcore costs $29.95 for one month of access, but promises to prove to all viewers that there might be girls in other countries just as hot, if not hotter, than Thai girls, but none make better amateur (and often unintentional) pornstars.

There's a surprisingly dense variety of body types and styles here, from thicker busty babes who throw every curve into their sexual antics to teeny, tiny girls who can barely take even an average-sized caucasian penis. Not only that, but the content is split into categories: Member Submit, Member Upload, Thai Submit (from the girls themselves), Thai Photos and Videos, and Exotic Thai Vacation pics and ids.

In addition to a small selection of 720p HD videos, Submit Your Thai often presents its photo content at fairly impressive resolutions of 1280x1920 pixels. These images offer a surprising amount of detail for amateur work. Videos don't reach the same impressive heights, but they often deliver very potent handheld scenes that are surprisingly intimate.

Cons:
Can be very disrespectful and insulting to the girls; willfully abusing their gullibility or dire financial straits to bust his nut and make money off their impressive physiques and sexual skills. It's one thing to appreciate foreign girls' sex appeal, but another entirely to abuse your position of relative (and largely financial) power.

Video quality isn't particularly impressive here at Submit Your Thai, but that's to be expected with most amateur sites. Still, with resolutions peaking at 720x480 pixels, there's nowhere near enough detail. Imagine these scenes in HD, they'd look so great you just might be motivated to head to Phuket to shoot some yourself. There are a few HD 720p videos, but they're definitely in the minority.

A download limit seems to be in place here, capping your transfers at 2 GB per 24 hours. This isn't an entirely unreasonable limit, but hoarders will surely take issue with it. One thing you won't be downloading, though, is zipped photo galleries; they're aren't any here.

Conclusion:
With far more photo than video content, Submit Your Thai is a difficult site to enjoy fully and not just because it's some other guys getting their dicks wet in the tightest, sweetest, moistest South East Asian holes on the 'net. What is online here is pretty damn appealing, though, and presents a side of Thailand you'd only see if you managed to visit the right bars and clubs, and pay the right men the right amount to lease their girls for a spell. The amateur sex is captured in shaky handheld camera movements and the usually very good, but occasionally over-flashed photography. Without zip downloads, the galleries prove tedious to compile into your own archive, and the daily download limit doesn't really help in that regard either. Still, without traveling to Thailand and producing this kind of amateur content yourself, you're not going to get closer to the tight snatches of tiny and very sexy Thai babes than Submit your Thai.